Northern Ireland: a shirking of responsibility 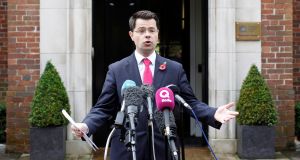 The latest collapse of the talks designed to facilitate a restoration of the powersharing institutions in Northern Ireland is deeply depressing. It raises the question of whether the Democratic Unionist Party (DUP) and Sinn Féin are more interested in getting the better of each other than in representing the people they were elected to serve.

It is time that Northern Secretary James Brokenshire acted on his earlier threat to stop paying the members of the Assembly while they remain in dereliction of their duty. Eight months after the last Assembly elections, there is no justification for the continuation of salaries for politicians and their staff. It has most certainly not acted as an incentive to compromise.

Brokenshire will now have to introduce a Northern Ireland budget for next year. Any protests at budget cuts from either the DUP or Sinn Féin should be treated with disdain given they have passed up the chance to have any say on how the North’s budget should be spent. The two parties have also undermined their own influence over the overarching question of Brexit. Given its damaging implications for the people of Northern Ireland, it is regrettable that Sinn Féin, in particular, is missing the opportunity to advance the interests of the majority who voted to remain in the European Union.

While the DUP insists the extra stg£1 billion it managed to extract from the Conservative government in Westminster as the price of keeping Theresa May in power will still be coming to the North, there must be some doubt about that in the absence of a functioning Executive.

However, even though the 2018 budget will be implemented by Northern Ireland civil servants, the imposition of full direct rule from Westminster will remain on hold in case the two parties manage to do a deal in the coming months. Minister for Foreign Affairs Simon Coveney was restrained in his response to the breakdown, saying that while it was frustrating he still believed there was a basis for agreement. He added, however, that it was “a step towards decisions for Northern Ireland not being made in Northern Ireland”.

The apparent reasons for the breakdown in the talks are the failure to agree on an Irish language Act, same-sex marriage and a bill of rights. Sinn Féin leader Gerry Adams said his party wanted to see “a rights-based society” while the DUP’s Gregory Campbell accused Sinn Féin of setting down preconditions and insisting on a narrow political agenda. Although the two governments have made it clear that an agreement between the parties at some stage in the future will trigger the restoration of the institutions, there is no obvious way out of the current deadlock for either Sinn Féin or the DUP. All is not lost but the prospect of the current stalemate persisting into next year is a dismal one.