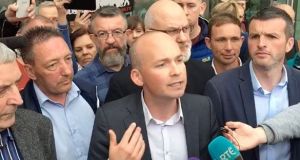 The acquittal of six men accused of falsely imprisoning Joan Burton and her assistant brings to an end one of the most surreal legal spectacles of recent years. Surreal not because the trial took place. That decision was taken by the Office of the Director of Public Prosecutions, a scrupulously independent and respected institution, and the claim by supporters of the defendants that the charges were a politically-motivated attempt to stifle protest should be treated with the derision it deserves. What made the trial surreal, not to say disturbing, was how so many of the conventions that have developed around jury trials were flagrantly ignored.

These ground rules are there for a reason: to ensure the integrity of the jury trial, a centrepiece of our justice system

Public commentary on ongoing trials is heavily circumscribed. The media reports only what the jury can see and hear. Until a trial concludes, a veil is drawn over legal argument that takes place in the jurors’ absence, and care is taken not to comment in a way that would influence the jury. These ground rules are there for a reason: to ensure the integrity of the jury trial, a centrepiece of our justice system. Those who breach them can find themselves in contempt of court.

In the so-called Jobstown trial, in which Solidarity TD Paul Murphy and five others were found not guilty of charges arising from an incident in Tallaght in 2014, the normal rules apparently no longer applied. Campaigners produced partisan running commentary on the trial. Activists systematically used social media to criticise and impugn the motives of those who gave evidence.

Advances in technology have long put strain on the jury trial. We were always asking a lot of jurors by expecting that they cloister themselves away for the duration of their service. In the age of Google, Facebook and Twitter, when everyone is a publisher and information is more accessible than ever, that expectation has become increasingly untenable. But the Jobstown trial highlighted the challenge more sharply.

By harnessing social media on such a scale, systematically chipping away at one of the pillars of our jury system, those campaigners have done themselves and their cause a great disservice.