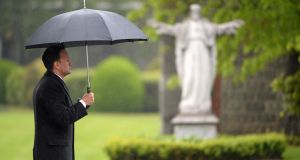 There is a striking variation in how the State’s two biggest parties will fare in the local and European elections taking place on the same day in just under two weeks, according to the findings of the latest Irish Times/Ipsos MRBI opinion poll.

The Sinn Féin share of the vote is marginally higher for the local elections compared to the Europeans. That indicates that the party is in a good position to hold on to its seats on local authorities. However, when voters were asked who they would support in a general election, Sinn Féin is under significant pressure with a five-point decline to 16 per cent since the last poll in March.

After a series of depressing polls for the past few years, the Labour Party has finally got some good news. It is on seven per cent nationally for the local elections and a more impressive 14 per cent in Dublin where it is level with Sinn Féin. If the party can win this level of support on May 24th, it should be able to regain some council seats after its dismal performance five years ago.

Fianna Fáil did well on that occasion and managed to recover its long held dominance over Fine Gael, winning 267 council seats as against 235 for its rival. Going on the poll result, there will be a close battle for the top spot this time but Fine Gael should at least recover some ground and may even emerge as the largest party.

In respect of voting intentions in the event of a general election, however, Fine Gael – at 29 per cent – has slipped below 30 per cent for the first time in more that two years while Fianna Fáil is up two points to 26 per cent. There is also bad news for Taoiseach Leo Varadkar whose personal satisfaction rating continues to fall – down seven points to 36 per cent, far off the stellar 60 per cent registered in January 2018.

People were also asked how they intended to vote in the referendum to change the Constitution to remove the requirement for divorcing couples to have lived apart for four years – the Oireachtas will then legislate for a two-year limit – and to provide for explicit recognition of foreign divorce. The poll showed 77 per cent saying they intended to vote Yes with just eight per cent planning to vote No while 11 per cent said they didn’t know. The low number of undecided voters is an encouraging sign that people are aware of the issues and know how they intend to vote.

1 Harry and Meghan will no longer be working members of British royal family
2 Netflix: The best 101 films to watch right now
3 Chris Hadfield on the climate crisis: ‘The world has seen much, much worse’
4 Dublin gangland figures involved in Drogheda feud that killed 17-year-old
5 Terry Gilliam: ‘Adam Driver is either an idiot or the last pure-hearted person out there’
Real news has value SUBSCRIBE