Irish Times view on the CervicalCheck report: a system that was doomed to fail

Astonishing crassness, insensitivity and malignant paternalism displayed by some doctors 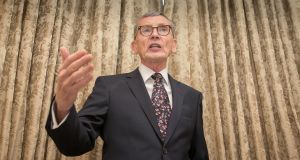 Dr Gabriel Scally’s conclusions are stark: there were many indications that the system in place “was doomed to fail at some point”. He found a demonstrable deficit of clear governance and reporting lines between CervicalCheck, the National Screening Service and the higher management structures of the HSE. Photograph: Gareth Chaney/Collins

The publication of the inquiry into the CervicalCheck controversy is the first opportunity for women directly affected to read an objective assessment of the debacle. Public health specialist Dr Gabriel Scally was appointed in May to chair an independent scoping inquiry to establish the facts after it emerged the screening service failed to tell women with cancer of the cervix what clinical audits of their smear tests had found.

Although the inquiry was non-statutory and could not apportion individual blame, Scally and his team have forensically examined documentation and spoken with key figures, not least the many women affected. His conclusions are stark: there were many indications that the system in place “was doomed to fail at some point”. He found a demonstrable deficit of clear governance and reporting lines between CervicalCheck, the National Screening Service and the management structures of the HSE. In a conclusion with ramifications for the wider health system, the Scally report says current policy and practice on open disclosure in the health service is “deeply contradictory and unsatisfactory”.

A stand-out strength of the report is the time and care afforded to the women involved. Extraordinarily, Scally found it was not just the original non-disclosure, but the rushed and unsatisfactory nature of later individual meetings that affected women adversely. The crassness and insensitivity displayed by medical professionals in some of these conversations is astonishing, reflecting a malignant paternalism, largely inflicted by male doctors. In Scally’s words, it varied from “unsatisfactory and inappropriate, to damaging, hurtful and offensive”. The Medical Council and other professional bodies must face up to their responsibilities in this regard.

Scally sets out a considered case in suggesting a commission of investigation – currently planned by Government – is now not needed. But a decision must be carefully weighed, taking due account of the views of women involved.

It is encouraging to note that women have continued to support cervical cancer screening since this controversy arose. Critically, Scally says he is satisfied with the quality processes in the laboratories where smears are currently examined. He affirms a role for CervicalCheck in the future: “With significant system change, effective leadership, improved clinical and public health medicine engagement, plus new and powerful patient advocacy, there is no reason why CervicalCheck should not deliver an outstanding service for the women of Ireland”.

Screening for disease is, and will remain, an inexact science but cervical screening has saved lives in the Republic. Decisive political action, in response to Scally’s recommendations, is essential to ensure it continues to do so.