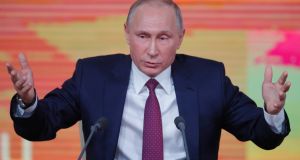 Vladimir Putin intends to run again in Russia’s presidential elections next March, but some of the problems the country faces will only ease once he leaves office. Photograph: Yuri Kochetkov/EPA

It is no surprise that Vladimir Putin intends to run again in Russia’s presidential elections next March, but a friendly aide with his legacy and the national interest in mind could have made a case for this being time to finally quit.

Putin has just declared “mission accomplished” in Syria, not only by helping defeat Islamic State and prop up president Bashar al-Assad, but by restoring Russia to the role of major player in the Middle East. He has exploited US indecision in the region, but Washington’s drift and Moscow’s ascendancy will not last forever.

In eastern Ukraine, where the Kremlin controls separatist militia, talks on deploying UN peacekeepers now give Putin a chance to put a statesmanlike spin on his withdrawal from a dead-end conflict. As the war grinds on, its cost to sanctions-hit Russia will only rise further as its propaganda value falls. A retirement-minded Putin could also have claimed to be leaving Russia’s economy in reasonable health, as resurgent oil prices fuel modest growth after more than two years of recession. Surely Russia’s ruler of 18 years must also realise that certain difficulties will only ease once he leaves office.

The latest US sanctions threaten to target the billionaire “oligarchs” closest to Putin, in an indication that there will be no rapprochement with the current Kremlin regime. Investigations into Russia’s alleged interference in the US elections and contacts with Donald Trump’s team look likely to take years, and the property developer’s presidency will forever be tainted by suspicions that Putin has some kind of hold over him.

Just as another “reset” in US-Russia relations is inconceivable under the longest Kremlin ruler since Joseph Stalin, so is fundamental change at home. Putin, who is 65, has had ample time to entrench the rule of law and fight rampant corruption and inequality, to diversify and modernise Russia’s resource-based economy and to deliver quality education and health care across the world’s largest country. Instead he has enriched loyal cronies, stifled free speech, independent courts and political opponents, and ploughed vast sums into vanity projects like the 2014 Sochi Winter Olympics and next year’s World Cup.

Putin cannot change now. That would be tantamount to admitting error, which would embolden opponents whom he claims want to plunge Russia into chaos. He made the claim during his annual televised press conference last week, while pledging again to do all the things he has overlooked since 1999.

The people who will really change Russia were not watching – a generation that gets its information online and has no memory of the post-Soviet turmoil that fed a national craving for Putin’s brand of “stability”. Stagnation is what Putin means to many young Russians, and they may not settle quietly for another six years of it.