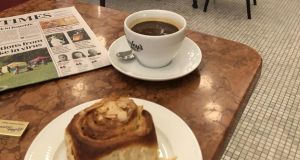 This day last year, in a now lost world, I was flying to Japan for the Rugby World Cup. Japan is proverbially the Land of the Rising Sun, but in fact our plane was somewhere over China when the darkness outside gave way to dawn. I watched fascinated as the thin spectrum of light on the horizon widened, and tried to capture it on my iPhone.

The pictures were all ruined slightly by reflections of my breakfast tray in the window. But even so, if the pandemic ever passes, I may get one framed as a permanent reminder that one never knows what’s coming next, from China or elsewhere.

Many hours later, after a stop-over, an onward flight, and a failed attempt to cheat jetlag with a few hours sleep, I remerged in Tokyo (where it was dark again) in urgent need of some Irish fans to interview.

Tired and disoriented – if you can be disoriented in the orient – I couldn’t find any. Then I was bailed out, mercifully, by a pub called The Irish Times, which was doubly calming.

Not only did it have fans, it also offered the spectacle, somehow soothing in a deadline panic, of a yellowing front page of the newspaper from years earlier, plastered on a wall of the gents.

Here’s another, which may have a certain resonance for our times. Of October 19th, 1940, he had only this gloomy thought: “The unspeakable depression of lighting the fires every morning with papers of a year ago, and getting glimpses of optimistic headlines as they go up in smoke.”

It’s exactly 150 years ago today since the start during an earlier war – the Franco-Prussian – of the Siege of Paris, an event infamous for, among other things, the deprivations it visited on that city’s cuisine.

Carnivores had to broaden their palates to include dogs and cats.

The city zoo was cleaned out too – not even the elephants were spared. Sauces became even more important than usual, especially in such dishes as “Salamis de rats. Sauce Robert”, where the middle word was the one you didn’t want to think about.

Among those who may not have been tempted by that was a Mrs Casey, the mother of several Fenian brothers (one of whom would later befriend a young James Joyce) then exiled in the city.

As recorded in the diaries of Fr Francis Bamber, she was looking for food in the market one day when they met. “But on seeing a long line of rats hung up for sale, she went away without purchasing anything.”

The siege was well covered from an Irish viewpoint. Journalists who lived through it included John Augustus O’Shea, who himself subsisted for a time on horseflesh – “six days’ rations of which I devoured raw between the butchers and my residence” – and “mahogany-hued bread, in which bran and sand were more plentiful than flour”.

The Irish Times correspondent was Edmund O’Donovan, who also covered the subsequent Paris Commune, an event he attributed largely to the bad food.

He once explained to another Fenian John Devoy (as recorded by the website irishmeninparis.org), that the rebels of 1871 were not actually communists, they had just been “unhinged” by the diet of the preceding winter.

In a mildly besieged Dublin on Friday morning, I paid a belated visit to Bewley’s Oriental Café – to give it its full title – the nearest I’ll get to the actual Orient this year. It was my first time there since it reopened. And this being autumn, the restaurant had not one but two of the elements mentioned earlier by Orwell – the usual hard-copy newspapers and a fire.

Only the Orwellian gloom was missing, notwithstanding Dublin’s expected designation as Level 3½ under the latest Covid plan.

Everything about the scene was reassuring. As always, the Harry Clarke windows filtered a softly stained light through their depictions of the Greek architectural orders. And then there was my almond bun. Not only was it at least as good as the ones I first ate there in the 1980s, this one was even warm.

When I tweeted a picture, someone queried the need for a fire in September. But as I explained, there was a slight chill in the air yesterday.  Besides, it wasn’t a roaring blaze, just a few briquettes.

Anyway, I got up to leave eventually, hoping as I always do in Bewley’s that it will still be there next time.

Then I took a last look at the fire and realised that, ominously, it had gone out.