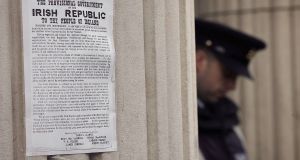 Helena Molony wanted to recreate Proclamation as accurately as possible. Above: a poster of the Proclamation during 2016’s Easter Rising commerorations. Photograph: Peter Macdiarmid/Getty

The first anniversary of the Easter Rising was marked in Dublin, as this newspaper reported at the time, “By a good deal of excitement”. It might have been even more exciting had the country not been in the grip of the coldest spring anyone could remember, with hail, snow, and sub-zero temperatures.

That and a preemptive army proclamation, warning against assemblies during the week ahead, may have contributed to making Easter Sunday 1917 unusually quiet in the city. But by Monday morning, mirroring events of the year before, the public mood (if not temperatures) had begun to heat up.

The Irish Times reported some commotion around the GPO at 9am as people noticed the reappearance of the “Sinn Féin flag” on the roof. It first floated at half-mast, then fell to invisibility during the morning until, at noon, a man emerged on the parapet to raise it again: “That was the signal for an outburst of cheering, and various other demonstrations of approval on a wide scale”.

Eventually, a police constable with a ladder climbed to the position and, with some difficulty, toppled flag and pole. These were then carried off by “youngsters” on the ground. Nearby, a Tricolour was also flown from the top of Nelson’s Pillar for a time, to a similarly warm reception.

Republican supporters wore black armbands, “While groups of girls with paper flags and coloured paper in their hair paraded Sackville Street”. But as the IT’s reporter noted with disapproval, the occasion also attracted the “lower element”, including a crowd of “young roughs” who threw stones at the Methodist Church in Abbey Street.

With so much rubble still around from the year before, conditions were ideal for a riot. And sure enough, during the afternoon, missiles were launched at police and shops, breaking windows and heads.

This was despite the attempts young men “wearing Republican badges” to keep order. A Supt Bannon and Insp Purcell were reported hit. So were the unnamed “Constables 35 F and 58 C”. But as during the original Easter Week, civilians also found themselves in the firing line, accounting for eight of 12 head injuries treated in Jervis Street hospital.

Out in Co Meath, meanwhile, the Grand National meeting at Fairyhouse was under way again. There was no repeat of the previous year when the many British army personnel in attendance had to scramble back into the city, commandeering every vehicle, so that the winning horse in the big race had to be walked home to Westmeath.

But the “Arctic conditions” must have deterred many regulars, and the smaller than usual crowd was dependent on what the IT’s reporter called a “holiday element” (element being a favourite word of the period, clearly). As expected in the feature race, the 5/4 favourite Pay Only romped home, although less literally on this occasion.

Back in Dublin, the other elements – meteorological – conspired with police to restore calm: “A sharp fall of hail and snow after sundown rapidly dispersed the crowd.” Most of the extra officers on duty were withdrawn to barracks by midnight.

In Cork, the anniversary was marked with a parade of several hundred from St Mary’s Cathedral to City Hall, where the municipal flag was lowered and replaced by the Tricolour. This was saluted by the marchers, who were eventually ordered to disperse by police “with drawn batons”. They did so peacefully, except for one woman, who assaulted a constable with an “umbrella”.

The Tricolour had also been raised overnight on the County Hall in Mullingar, from which police eventually removed it. On Vinegar Hill in Wexford, one of several flags hoisted carried the words: “The Republic still lives”. And that was also the implicit message of another of the commemorations, in Dublin again, organised by the trade unionist and actress, Helena Molony.

Molony had been among those behind the co-ordinated flag-raising: they had also tried to smuggle a flag into the College of Surgeons, until having to settle for flying it from the home of a sympathiser nearby.

But she also wanted to recreate the 1916 Proclamation posters as accurately as possible. The originals had been famously improvised from limited printing resources at Liberty Hall. Now, it occurred to the commemorators that some of the actual type used a year earlier could probably still be found among the debris there.

It duly was, and a firm of printers in Liffey Street worked through Good Friday and Easter Saturday 1917 to get the facsimiles done on time. After that, Molony and others flour-pasted the posters all over the city, where some remained for months.