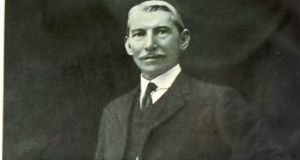 Sir Michael O’Dwyer: key figure in the Amritsar massacre of 100 years ago was not the usual picture of a colonial overlord

By way of explaining an event for which he became infamous, an article in the latest London Review of Books refers to a man as having been brought up “in the lawless backwoods of Co Tipperary”.

The biographical detail is presumed to shed light on how he became such a stickler for law and order – or at any rate for order – as to have been complicit in the Amritsar massacre of 100 years ago (the subject of the book being reviewed).

O’Dwyer was born in a place called Barronstown, in 1864.  And in describing that as a “lawless backwoods”, the latest commentator on his life may be taking a cue from an earlier historian of the Raj, who had O’Dwyer growing up “in a world of hunting and snipe-shooting, of threatening letters and houghed cattle, where you were for the Government or against it…”.

Never mind that at least two of the clauses in that quotation describe legal activity, or that being for or against the government is a normal condition of democracy.

The details are nevertheless supposed to help explain why O’Dwyer had no tolerance for democratic reform in India, and why he backed Gen Reginald Dyer (perhaps even putting him up to it) when the latter’s troops opened fire on unarmed civilians at Jallianwala Bagh on April 13th, 1919, killing hundreds.

O’Dwyer is not the usual picture of a colonial overlord.  He was born Catholic, one of 14 children in a farming family of “no great wealth”. His path to Amritsar began when he passed the entrance exam for the Indian Civil Service as a teenager, which earned him an Oxford education en route to the Punjab.

By coincidence, Barronstown is just down the road from another place featuring heavily in this year’s centenaries, Soloheadbeg. The shooting there in 1919 was on a rather smaller scale, and a strike against authority rather than by it. But both events had far-reaching consequences for the empire.

Lawless backwoodsmen or not, it’s extraordinary to think that O’Dwyer and Dan Breen should have emerged from the same small corner of Ireland, and from not dissimilar backgrounds, albeit 30 years apart, before going such different directions.

The divergence continued until the end of their lives.  Both lived to be 75, but Dan Breen died of natural causes, improbably, whereas O’Dwyer was assassinated in 1940 by a Sikh who had waited 21 years for revenge.

Combined, they make an interesting lesson in the complexities of history.  Perhaps the two should be mentioned together on a commemorative plaque somewhere suitable. I suggest their local railway station, that place synonymous with diverging destinies, Limerick Junction.

In his great essay Shooting an Elephant, George Orwell describes how, as a young colonial policeman in Burma, he did just that once, after the animal ran amok.

He records its lingering death in painful detail: all the worse because, as he admitted, by the time he caught up with it, the elephant was no longer a danger.

Unfortunately, a large crowd had followed Orwell to the scene, expecting drama.

If he appeared cowardly or indecisive before them, he feared, they would laugh at him: “And my whole life, every white man’s life in the east, was one long struggle not to be laughed at.” So he killed it.

There may have been a similar motivation at Amritsar too. Defenders of Dyer portrayed the massacre as an unplanned reaction to a pressured situation, in which his own troops were threatened.

As the LRB points out, however, Dyer himself believed he could probably have dispersed the crowd without firing but worried they would have “come back again and laughed”.

Ridicule was a weapon much-feared by colonial rulers, clearly. You’d wonder that the empire wasn’t brought down earlier given all the satirical ballads written about it, especially in this country.

One of that genre’s best-known songs, like Orwell’s essay but more humorously, dramatises the relationship of colonised and coloniser through the confrontation between a policeman an an animal.

In this case, it was a talking animal – indeed a fast-talking one. And it gets to deliver all the best lines in the famous ballad, which is entitled The Peeler and the Goat.

Funnily enough, the author of that was from southwest Tipperary as well. His name was Darby Ryan, and he lived a century earlier than O’Dwyer or Breen. But he too was from the lawless backwoods: specifically Bansha, just a few miles south of Barronstown and Soloheadbeg.

1 Bank leaked my loan request to family who tried to rip me off
2 Spread of coronavirus triggers European travel curbs
3 Why Sinn Féin will not call the State by its name
4 Brazilian father to be deported days after daughter’s birthday
5 What evidence is there that the IRA still controls Sinn Féin?
Real news has value SUBSCRIBE