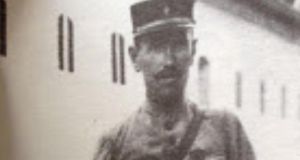 When the Paris Peace Conference got under way 100 years ago today, independence-seeking Ireland, like most small nations, was not represented. There was one notable Irishman present for some of the subsequent proceedings, but he was only there in what might be called an observer capacity.

Dubliner William Orpen had been an official British war artist since 1917. He was now asked to paint the peace talks, which he did with a growing sense of disillusionment.

Orpen was not alone in being appalled at the horse-trading. As the big three of Woodrow Wilson, David Lloyd George, and Georges Clemenceau ignored their advisers while redrawing the world’s maps, one young British diplomat despaired that such “ignorant and irresponsible men should be cutting Asia Minor to bits as if they were dividing a cake”.

Orpen’s commentary was more oblique. Commissioned to produce three large group portraits of the negotiations, he produced one from the French foreign ministry on the Quai d’Orsay, where much of the talking took place, and another from the Hall of Mirrors in Versailles, where the main treaty was signed in June.

Even in those, his dislike of the politicians may explain why he has them dwarfed by the stately architecture. But after working on the third group for months, he lost patience with what he saw as the disrespect for the war dead. Painting over his living subjects, he replaced them, in the same surrounds, with the flag-draped coffin of an unknown British soldier.

Elsewhere in Paris, meanwhile, a delegation from the embryonic Irish Republic was working hard to gain international recognition. Refused a place at the talks, Sean T O’Kelly and George Gavan Duffy set up headquarters in the Grand Hotel on Rue Scribe, near the Opera Garnier.

From there, they circulated the Bulletin Irlandais, a propagandising news sheet, and generally tried to bend the ears of the foreign press. Alas, they too experienced disillusionment. The path to influencing local journalists’s hearts and minds, O’Kelly suggested in a letter home, was through their pockets.

Asking Dáil president Cathal Brugha for a “few thousand pounds”, he explained: “You can get nothing whatsoever done otherwise. They all expect it [and] are very frank in letting you know”.

The Grand Hotel was and remains synonymous with the Café de la Paix, a haunt of James Joyce whenever he visited the opera house opposite. A few years later, it would be one of the locales for Joyce’s shameless promotion of Cork-born tenor John O’Sullivan, whose voice he adored.

The writer’s propagandising (see Irishman’s Diary, December 7th) led one newspaper to report that he had miraculously regained his eyesight during an O’Sullivan performance. But lacking Joyce’s marketing genius, the Irish delegation did at least have the services as secretary of the remarkable Michael MacWhite, who was responsible for one of their more notable coups.

Another Corkman, MacWhite had been widely travelled as a newspaper correspondent before the war, during which he served as an officer of the French Foreign Legion, and won the Croix de Guerre. In joining the Paris delegation, he launched a diplomatic career that in time would see him represent the Free State at the League of Nations, and later in the US and Italy.

He brought his flair for reportage to the job. One of his cables from Rome in 1945 began: “The closing chapter in the history of fascism has just been written. On Saturday, April 28th, at four in the afternoon, near the town of Como, Mussolini toppled over and died before the rifles of a Partisan detachment.”

But as the website irishmeninparis.org details, he had a flair for dramatic gestures too. A year after the Treaty of Versailles, that same town hosted a ceremony to mark the 150th anniversary of the birth of Lazare Hoche, a local who rose to be army general during the French revolution and led the abortive mission to Ireland in 1796.

The mayor of Versailles had given MacWhite permission for a discreet presence at the ceremony, which brought thousands to Hoche’s statue in June 1920.

And thanks to his Foreign Legion uniform – he had not yet been demobbed – MacWhite remained discreet until the wreath-laying, when he strode forward and placed a bronze palm, with green, white, and orange ribbons, under the statue.

He then saluted the platform, where it was assumed he represented the Legion.

But the Paris edition of the New York Herald reported the event under the headline: “Versailles Mayor Gives Recognition to Fenians”.

And not long afterwards, for ostensibly unconnected reasons, Gavan Duffy was expelled from France.