Diarmaid Ferriter: We must consider NPHET may be wrong

Have we focused too narrowly on medical and scientific view of emergency team? 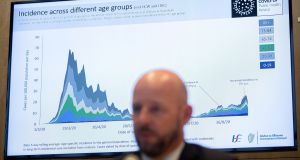 Covid-19 graph and Prof Philip Nolan: Have we suffered from a lack of consideration given to opinions alternative to those promoted by the National Public Health Emergency Team? Photograph: Colin Keegan

A range of history books has recently appeared, seeking to put Covid-19 in context. Mark Honigsbaum’s The Pandemic Century is adamant that human degradation of the environment and disturbance of the equilibrium of natural systems have played a major part, which does not bode well for the future given how destructive we are. Yale historian Frank Snowden’s Epidemics and Society sweeps from Black Death to the present and makes clear that despite our “lapse into forgetfulness” they have been both central to how we have evolved and are also a threat to our survival. Reactions to epidemics have been enveloped by ideology, prejudice, ignorance and enlightenment but final triumphs over disease are rare.

These books are, amongst other things, an antidote to the wide currency of the assertion lambasted by polemical French philosopher Bernard-Henri Lévy in his own recent, rushed book The Virus in the Age of Madness: “People keep saying this is an unprecedented pandemic. It is not true. Humanity has had to deal with many pandemics, often more grave than this one. There seems to be an intention, a collective desire, to panic.” The first part of his declaration is true; the second is certainly not.

1 Coronavirus: Further 430 cases reported in State most in a day since April
2 More than 30 people queue overnight to secure property in Carlow
3 Gardaí appeal for information on rape of teenager in Co Mayo playground
4 ‘To die of love’: The 1968 sex scandal that still fascinates France
5 Susie Dent: ‘Jimmy Carr is incredibly rude to me. I took it as a compliment’
6 My friends keep mocking my new boyfriend’s small penis
7 Man with electric scooter who died in Meath was due to get married in the coming weeks
8 Neven Maguire’s Midweek Meals: Quick and easy meals for the family
9 Traffic volumes show Donegal locking down to greater extent than Dublin
10 Tour de France: Every yellow jersey winner must feel guilty by some association
11 Political focus shifts as Government desperately tries to avoid new lockdown
12 Michael Harding: ‘Do I know anything? Very f**king little’
13 Two turnkey homes for sale on same street as owners leave Dublin
14 Hospitality industry suffers another blow as New Year’s Eve festival is cancelled
15 ‘I’m frightened by people whose stupidity is putting my life at risk’
16 In this strangest of recessions, what happens next for Ireland?
17 Covid test in use at Rome, Frankfurt, Dusseldorf airports being piloted in Roscommon
18 UCC students face expulsion if they breach Covid-19 guidelines
19 Breda O’Brien: What if RBG had focused on persuading others that both lives matter?
20 The Books Quiz: Who wrote The Naked Lunch?
21 More than 100 people gather in Co Donegal for anti-Covid-19 restrictions rally
22 Traffic chaos as ‘singing and dancing’ woman stops car in middle of motorway
23 Luggala estate reopens to walkers for first time since March
24 Bill & Ted in middle age: ‘We felt if we did it with heart, it would work’
25 ‘Entirely wrong’ to remove pandemic payment from students, says Sinn Féin leader
26 Bielsa delighted with improved defence as Leeds move for Cantwell
27 Chris Johns: Boohoo exposed on pay and conditions in digital economy
28 Buttered leeks, salmon and dill with orzo: a healthy dish bursting with flavour
29 Mary McAleese memoir: Fascinating, but not the full story
30 How to fight the psychological fatigue of Covid-19’s second wave
31 Hundreds of thousands in China given ‘emergency’ Covid-19 vaccine
32 Fintan O’Toole: Covid-19 pandemic might be good for the arts – eventually
33 Tanya Sweeney: It was never my place to ask why she wanted to die
34 Hotel bookings collapse in wake of additional Covid restrictions
35 Life in Level 3: What is happening under the new restrictions in Dublin?
36 David McWilliams: The better the economy does, the more Covid-19 spreads
37 Trump selects Amy Coney Barrett for supreme court
38 Brendan Gleeson as Donald Trump: ‘A mediocre impression and possibly a great performance’
39 Homely Monkstown original with garden oasis for €425k
40 Co Donegal hotel offers €2 rooms to locals to circumvent Covid-19 outdoor dining rules
Real news has value SUBSCRIBE