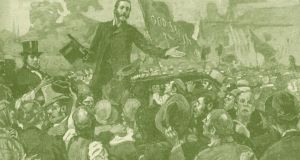 Reflections on the 125th anniversary of the death of the iconic Irish nationalist leader Charles Stewart Parnell this month have been relatively sparse, not helped, perhaps, by the fact that this anniversary falls on the centenary of the 1916 Rising – which effectively marked the end of the home rule campaign that Parnell was so central to from the late 19th century.

But Parnell’s legacy was to live on in other ways.

He was at the height of his power during the UK general elections of 1885 and 1886, which were milestones because they were fought under a much-widened franchise.

The Franchise Act of 1884, however, extended the vote to all adult male householders who had paid their rates and were registered. Women continued to be disfranchised but most households in the country now had the vote.

For Parnell’s parliamentary party, that era was also about building on this expansion by modernising party politics, binding MPs into a tight discipline, paying them a salary and devoting much attention to constituency organisation and selection.

As Conor Cruise O’Brien characterised it, in his 1957 book Parnell and His Party, the home rule movement was transformed into a “well-knit political party of a modern type – effectively monopolising the political expression of national sentiment”.

These changes inevitably further tightened Parnell’s control over his party.

This grip was also underpinned by the home rule party pledge formulated in 1884.

Irish Parliamentary Party candidates pledged that if elected “I will sit, act and vote with the Irish Parliamentary Party; and if at a meeting of the party, convened upon due notice, specially to consider the question, it be decided by a resolution, supported by a majority of the entire parliamentary party, that I have not fulfilled the above pledge, I hereby undertake forthwith to resign my seat”

One of the ironies of the eclipse of the home rule movement, and the rise of Sinn Féin in the decades after Parnell’s death, was the zeal with which this preoccupation with the need to “sit, act and vote” on party lines endured.

As historian Michael Laffan has observed, in the aftermath of 1916, “Sinn Féiners adopted and adapted the tactics of their home rule enemies – who provided the only available model”.

They went on to “beat the home rulers at their own game . . . they soon came to represent and cherish old customs associated with the Home Rule Party”.

Such traditions included localism and patronage but also party discipline, or what is referred to as the party whip system, and all the main political parties subsequently cemented this discipline.

It is a system that has endured despite much talk of “new politics” or what Minister for Education Richard Bruton refers to as the new “collegiate ordering” of politics.

It has been common over the years for new backbenchers to very quickly discover they are mere voting lobby fodder.

In July 2013, at the MacGill Summer School in Glenties, the current Minister of State for Financial Services Eoghan Murphy, then a backbencher, was more frank and amusing than most when he delivered a paper that included a short story under the title Confessions of a Button Pusher: Show up and Shut up, the life of a Government Backbencher.

It was about an ambitious first-time backbencher with a fine welcome for himself who quickly discovers the limits to his role.

Murphy’s message was clear – the whip system is stifling and crude, or as Murphy put it in a pamphlet on reform of Dáil Éireann that same year: “for what is a vote worth if it is not free”?

This is also a question relevant to the current rows about abortion, as many politicians – of all parties and none – can hide behind the Citizens’ Assembly as an excuse not to contemplate free votes or breaking ranks.

Those who have, in the past, defied the whip have faced what the party whips like to call “robust consequences”; when Sinn Féin’s Peadar Tóibín voted against the Protection of Life During Pregnancy Bill, for example, he was suspended from his party for six months and was, amusingly, described by a republican newspaper as a “Pro-Life dissident”.

What the whip has meant in practice is that the Dáil, which should be a citizens’ assembly, is not one.

It is still largely a galley of whipped voting slaves.

That is why there has been the constituting of an extra-parliamentary assembly to do what most politicians will not, or are not allowed to do, partly because of the legacy of a remarkable, but also autocratic political leader who died 125 years ago.

1 Coronavirus: 200 new cases reported in largest daily total since May
2 Anne Doyle: ‘Depression? I know what it is, and it’s a b*tch’
3 Gardaí investigate after woman pushed into Royal Canal following alleged racial abuse
4 36 hours on Northern Ireland’s Causeway Coast: ‘Everyone is having a wild time’
5 Chairman of Fáilte Ireland resigns after it emerged he is holidaying in Italy
Real news has value SUBSCRIBE