Diarmaid Ferriter: 50 things we need in Ireland in 2016

Commemoration hi-jackers and hipsters beware because Frongoch awaits you 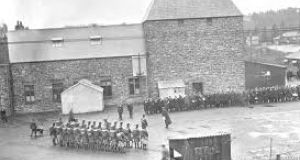 ‘People who show no respect for boundaries by roaring in to their mobile phones on buses, trains and trams to be interned in Frongoch to join the commemoration hijackers, those who do not clean up after their dogs, those who deny climate change and the hipsters with very long beards.’

As the year draws to a close, it is time to plan ahead.

1. Local and national politicians who fill out declaration-of-interest forms honestly and correctly.

4. A general election based on realistic proposals to govern differently.

5. A new government committed to the idea of a republic.

6. Young men to realise that tracksuits are supposed to be for the track and are not to be worn on every occasion.

8. A narrative of 1916 that is honest, evidence-based and complicated.

9. Those who hijack and distort the 1916 commemorations to be interned in Frongoch, Wales. This is where many of the 1916 rebels were interned. Today, the residents of Frongoch are keen to see the erection of a memorial marking its 1916 connection, but it would be more helpful if it could be used in 2016 to intern new Irish nuisances.

11. New names for storms that make them sound as horrible as they are. Dympna, Sorcha, Oisín and Seán should not be in the reckoning.

12. A solution to the homelessness crisis.

13. Cyclists to be treated with more respect and subjected to less abuse by bullying motorists.

14. Conor McGregor to be knocked out at one of his press conferences.

15. Those who do not clean up after their dogs to be interned in Frongoch, joining the commemoration hijackers.

16. Interviewees who begin their answer with the word “So” to be banned from the airwaves.

18. A Rose of Tralee for men, presented by Olivia O’Leary.

19. Regular breaks from the internet and smartphones.

21. Women’s sporting achievements to achieve the recognition they deserve.

23. Fewer responses from politicians that begin with: “Let me be absolutely clear about this.” After that opening line, the response will be absolutely unclear.

24. An emphatic rejection of a second Celtic Tiger.

25. Children able to attend their local schools regardless of religious faith or belief.

28. An Irish soccer team scoring goals in France. Lots of them. Don’t laugh.

29. Roy Keane to behave himself in France. Don’t laugh.

30. Oscars for Irish films and actors. Just a few will do.

31. A clear explanation of, in the words of the banking inquiry’s remit, “the reasons Ireland experienced a systemic banking crisis, including the political, economic, social, cultural, financial and behavioural factors and policies which impacted on or contributed to the crisis and the preventative reforms implemented in the wake of the crisis”.

32. A new style of politics in Northern Ireland.

33. The balance to swing back in relation to health reports so that we are told that what we enjoy and think is bad for us is actually good for us.

34. Sports books that are written by the athletes who are the subjects of the books.

35. Repeal of the eighth amendment of the Constitution.

36. The staging of more plays by women.

37. The breaking of the power of venal landlords.

39. A greater number of handwritten letters.

40. Much more focus on things we do well.

42. Recognition that climate change is the greatest challenge we face. Those who deny that to be interned in Frongoch, joining the commemoration hijackers and those who do not clean up after their dogs.

43. Mounted gardaí who clean up after their horses.

44. Young male “hipsters” to shave off their very long beards. And commit to not growing them again. Transgressors of this rule to be interned in Frongoch, joining the commemoration hijackers, those who do not clean up after their dogs and those who deny climate change.

45. The Irish Farmers ’ Association to return to its roots

47. More decent programmes on television so that we do not get hooked on box sets and then mourn our losses when they are finished and start reminiscing, yet again, about the greatness of Breaking Bad.

48. Banks that welcome the presence of people in their branches instead of doing everything possible to prevent human contact.

49. Fewer machines that speak at us and more people to speak to us when we need help, information or explanation.

50. People who show no respect for boundaries by roaring in to their mobile phones on buses, trains and trams to be interned in Frongoch to join the commemoration hijackers, those who do not clean up after their dogs, those who deny climate change and the hipsters with very long beards.

1 How one couple’s weekend away resulted in 30 Covid-19 cases
2 The Comey Rule review: You actually begin to root for Trump
3 Taoiseach tells TD to ‘cop on’ over criticism of contact tracers asking about pubs
4 H is for hero: the origin story of Jack Reacher, a billion-dollar brand
5 Miriam Lord: Government’s latest comedy of errors offers little to laugh about
Real news has value SUBSCRIBE