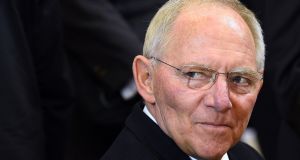 German finance minister Wolfgang Schäuble: Like a nun swearing off the pope, he said he would no longer confuse his personal pro-European convictions with the sombre reality of today’s post-Brexit EU. Photograph: Emmanuel Dunand/AFP/Getty Images

Wolfgang Schäuble, the 73-year-old elder statesman of German and European politics, has demonstrated time and again that when it comes to putting the cat among the pigeons youthful energy is no substitute for political wiles.

For decades Schäuble has pushed European integration and pooled sovereignty as the only way to solve challenges bigger than EU states.

Yet in a remarkable weekend intervention, the most pro-European member of the German cabinet – a veteran of the Kohl era and of countless European crises – conceded that the Brexit vote had shaken his EU vocation to its core.

The German minister for finance says he now thinks differently about Europe. Like a nun swearing off the pope, he said he would no longer confuse his personal pro-European convictions with the sombre reality of today’s post-Brexit EU.

Europe’s response to Brexit cannot be a collective retreat to nation states, he said, nor was “more EU” an appropriate answer to a stinging British vote against the EU.

With Europe’s problems piling up, and populists fanning the flames of Euroscepticism, Schäuble argued that Europe’s best response to Brexit aftershocks was to adopt a results-based approach. People could be won back to the idea of Europe if leaders showed they could solve quickly the pressing problems of the day: youth unemployment, the migration crisis and cross-border security.

With time tight and populism on the rise, he said what counted now was solutions and not how they were achieved.

The EU could no longer afford to cling to old methods, he said, where the European Commission drafted proposals, national politicians haggled over them in the European Council, and then passed a compromise on to MEPs for parliamentary backing.

Schäuble’s proposal: if some member states want to pursue policy outside of EU institutions – as they did in the euro crisis – then they should do so.

If their avant garde approach turns up a workable common policy – on joint asylum rules, for instance – there is nothing to stop this agreement flowing back into a new EU-wide asylum law backed by 27 members.

His ideas for a “two-speed Europe” date back to 1994, while in the last decade the Merkel administration has made an aggressive push towards an intergovernmental Europe idea at the expense of the European Commission’s so-called “community method”.

The proposal has a major weak spot: its neighbours do not see Berlin as a disinterested observer but, as largest country, the chief beneficiary of such an intergovernmental arrangement, with the European Commission referee outside the door.

It is just the latest demonstration of Germany’s talent for tin ear European diplomacy.

The tin ear was in evidence immediately after the Brexit vote when German foreign minister Frank Walter Steinmeier invited colleagues from the EU’s founding states to discuss the Brexit fallout in Berlin – he was amazed that other members were offended at being excluded.

The migration crisis standoff, Schäuble says, was a key motivation for his shiny, new plan for Europe, in particular his annoyance last year that “the Brusselers needed so long to react to the refugee crisis”.

A quick reminder: the European Commission put proposals for resolving the migration crisis on the table in May 2015. It was the member state politicians – Germany, Ireland and the others – who spent the rest of last year failing to reach a common position or refusing to implement what they eventually agreed.

It is one thing when UKip or the Daily Mail blames “Brussels” for delays, but what should we think when a senior politician from the EU’s largest member states joins in?

Pushing for a pro-active Europe is to be welcomed, as are all efforts to prevent EU stragglers setting the pace of European policy-making.

But Schäuble has cheapened himself – and the debate – by urging Europeans to “stop playing the typical European and Brussels games” while indulging in a game as old as the EU itself: blame Brussels.

Their new argument will be: “join our growing rebellion or in future face a choice between cholera and the plague: a Brussels-dominated EU or a bloc lead by tin-eared Berliners.”

Before repeating his proposals for a two-speed EU, Schäuble should reacquaint himself with his own 1994 paper on the topic. In it he argued that the best way to win back wary, weary EU citizens to the European project was with “more democracy, more openness and transparency”.

For all its flaws the European Commission-lead EU has traditionally been the best mechanism for smaller states like Ireland, providing a welcome counter-weight to larger capitals.

When Taoiseach Enda Kenny next heads to Berlin he should be wary if Merkel tries to serve him old German wine in new Brexit bottles.