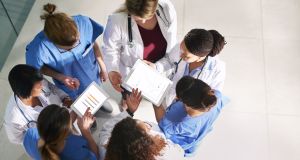 This well-written report lifts the lid on state-sponsored inequalities in access, funding and provision of hospital care

The de Buitléir report published on Monday sends a clear message to government – that the removal of private work from public hospitals can and should happen. It states that “the Government should send a clear signal through legislation that, from a specific date in the future, no private activity in public hospitals will be permitted”.

Donal De Buitléir and his team (an accountant, a city manager, an economist and ex-HSE HR director) are no bunch of radicals. Their establishment was a recommendation in the 2017 Houses of the Oireachtas Sláintecare report. Their remit was to examine and inquire into the effects of removing private activity from public hospitals. They do this meticulously, calling on Government to legislate “so that public resources are used only for purposes of providing public services in our public hospitals”.

Critically, they reinforce the original the 2017 Sláintecare proposals, that all the actions are interrelated and achieving the aim of universal access to timely, high quality, integrated care for everyone in Ireland requires Government to deliver on a whole suite of reforms. They make it explicit that to successfully remove private activity from public hospitals, government must resource and deliver on a range of commitments including access to diagnostics, “an extension of entitlement to, and the range of, primary care services”. They warn that “dragging on a transition indefinitely would only postpone and undermine achievement of the defined objectives” of Sláintecare.

Within hospitals, in order to provide to care on the basis of need, “an additional 1,000 consultants will have to be recruited to the new Sláintecare Consultants Contract”. Enhancing the health system’s resources, detailed in the 2018 Department of Health Capacity Review, is absolutely crucial to delivering equitable access to timely public hospital care.

The Review Group made a public call for submissions and their work was aided by expert input from the WHO, OECD and the ESRI. All this informed the review group’s position that Ireland is an extreme outlier with public patients experiencing extremely poor access to hospital diagnosis and treatment when compared with all other countries.

They say “a progressive or phased removal of private activity . . . is the single most important step in recognising the complexity of this policy change”. They make eight specific recommendations, four of which require paying consultants more. They recommend an end to unequal pay for new entrants (introduced by James Reilly in 2012), which continues to have hugely negative repercussions for recruitment and retention of consultants. They recommend that from here on in, consultants in public hospitals only carry out public work, specifying a “Sláintecare Consultant Contract” for new entrants. To achieve this, there will need to be a “contract change payment” for the majority of consultants who currently work privately in the public hospital system, as well as potentially higher pay for highly specialist posts that are hard to fill. Moving immediately on their recommendations “will address some of the fundamental problems relating to access and equity in the health service”.

The report details the cost of removing private activity from public hospitals at €650 million in the 10th year of its implementation. The 2017 Sláintecare report recommended this happen in five years. In a radio interview last Monday, de Buitléir says the costs are “phased . . . progressive . . . well-affordable’. In effect, the additional €650 million is a transfer of payment from what is currently paid through private health insurance to the public purse in the future.

Everyone in Ireland will continue to be entitled to public hospital care and those that want to access private care can in private hospitals. The authors state it is hard to predict what will happen to health insurance. They expect that removing private practice from public hospitals will reduce insurance costs initially and then they would rise as fewer people will feel the need to have an insurance policy (this being dependent on full Sláintecare implementation). The health insurance market has proved resilient in the past and the report concludes that “successful Sláintecare reforms would reduce the size of the market and ultimately lead to a change in the nature of health insurance to a more supplementary role over time”.

This well-written report lifts the lid on State-sponsored inequalities in access, funding and provision of hospital care. For example, it calls out the current position of how public money pays for the clinical indemnity (malpractice and negligence) of consultants carrying out private practice in public hospitals and the claims of consultants practising privately, outside of the public health system, once the claims reach a certain sum.

This is a careful, cautious but clever rallying call for political and economic support for a properly funded public health system where access is universal, delivered through progressive, multifaceted reform implementation. The risks and costs of removing private practice from public hospitals are outlined, the greatest risk identified is not implementing the Sláintecare measures as a whole.

This report was written last year. It has been sitting on the desks of senior health department officials and the Minister for nine months. Purposefully published quietly on a Monday morning in late August, there were no photo-ops, no Minister present at its very low-key launch. As Brexit implodes and Government spin is already in overdrive about prudent budgets and no additional health spending, de Buitléir has put it up to Government to act immediately.

Sara Burke is a health policy analyst in the Centre for Health Policy and Management in Trinity College Dublin. She co-ordinated a research team which provided technical support for the Oireachtas Committee on the Future of Healthcare which produced the 2017 Sláintecare report.