Countied out – The contrasting fates of English and Irish county boundaries 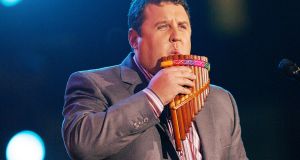 Peter Kay: Lancashire comedian has the old country on his mother’s side

The concept of “county lines” has been making a comeback in Britain recently, but not in a way that would please nostalgists. Far from marking a renewed interest in such historic counties as Yorkshire and Lancashire – abandoned for local government purposes in the 1970s and increasingly irrelevant since – the new “county lines” are a euphemism for drug distribution.

They refer to the supply of hard drugs from urban centres to rural towns. And even then, the phrase shows little interest in old maps. The “lines” are dedicated mobile phones. The “county” bit means nothing. Apart from a shared interest in marking turf, drug dealers are not cartographers.

It’s Matthew Engel I feel sorry for. In his educational but funny book of 2014, Engel’s England, he visited that country’s 39 historic counties (plus London), hoping to find the “essence” of each. This despite the fact that even then, whatever about their essence, it was increasingly hard to find their borders.

The ancient divisions had “withstood a thousand years of epic history,” he lamented, “but not the idiocy of the 1970s”. And since there was no longer any clear definition of what a county was, he sometimes had to rely on his own judgment: “The recent history is so shambolic I’ve just had to decide that I know a county when I see one.”

In his preface, Engel cast an envious glance at this country where, in one of the greater ironies of the Eight Hundred Years of Oppression, we guard our county borders with a respect no other Anglo-Norman imposition ever enjoyed.

Yes, some of the lines coincide with older Gaelic kingdoms of the kind our forefathers marked by burying sacrifice victims in, like Cloneycavan Man. But even the later, more arbitrary borders, are now considered sacrosanct in the Irish psyche, their identity-conferring powers only growing with proximity to the dividing lines.

To complete the irony, the greatest underwriter of the system is the GAA, originally established to counter the influence of England and all its works but now policing the colonisers’ boundaries with enthusiasm worthy of the Sheriff of Nottingham.

It’s because of GAA that, if he were alive now, Cloneycavan Man might be inclined to boast (with apologies to James Brown): “Say it once, say it proud. I’m from Meath and not Louth”. All right, that’s not a big boast these days.

And Cloneycavan’s proximity to Westmeath would probably make that his most pressing local rivalry. Besides, like fans in 30 other counties, Cloneycavan Man might feel himself a poor relation compared with Dublin, whose boundaries and vast resources are also indivisible for GAA purposes.

Cricket used to do something similar in England. Yorkshire cricket, for example, was in some respects even more fundamentalist than the GAA. Until 1992, you had to be born there to play for it. Then going to school within its borders was enough (that excused Michael Vaughan, who had been cursed by birth in Manchester before his family moved to Sheffield). From there it was a slippery slope to signing Sachin Tendulkar.

But even if the county boundaries have long blurred, Engel’s book did find stark differences, sometimes between neighbours. A defining characteristic of Lancashire, he thought, was humour: “The list of Lancashire comedians goes on for ever.” Which provoked the question: “Why is Yorkshire so unfunny in comparison?”

The different weather either side of the Pennines was a possible explanation. Ireland was another. Engel quoted one local comedian, Mike Harding, as crediting the influence of the countless emigrants for whom Lancashire had been a first and last stop after Dublin

Like Peter Kay, Harding has the old country on his mother’s side, and thought its “tradition of music, the put-upon self-deprecation, the storytelling” had rubbed off on Liverpool and Manchester. Whereas, in Engel’s contrasting summary: “Yorkshire was influenced by the Vikings, not a whimsical race.”

By coincidence, I have lately been reading a 20th-century Lancashire classic: George Orwell’s The Road to Wigan Pier: a mostly grim account of life among that town’s coal-mining families circa 1936, many of them Irish and Catholic, even if as Orwell notes, their accents were all now Lancastrian.

And there’s not much humour in it, truth to tell. But the title itself was a joke, of unknown authorship. Comparisons between Wigan’s Pier and the one at glamorous Brighton, for example, were always fanciful. Wigan was too ugly and polluted to be a seaside resort. Also, crucially, it didn’t have a seaside. Its original pier is thought to have been a short coal wharf, on the canal. Even that had been demolished by the time Orwell arrived.