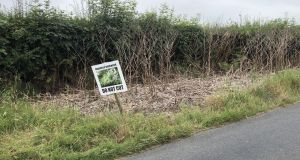 Walking the backroads along the Border recently, for a feature elsewhere in this newspaper, I was struck by the number of signs warning about the dangers of certain overseas migrants.

No not the sort of migrants that keep British Brexiteers awake at night, and make them want to regain control of all their borders except the Irish one (apparently). In this case, the migrant was a mere plant, Japanese knotweed. And undeterred by the political boundary, it featured on both sides.

The message of the signs, unusually, was to do nothing. Specifically, in letters larger than the name of the weed itself, they warned the public: “Do Not Cut”. Cutting would only help the plant propagate.

Instead, it had been sprayed with herbicide, and might be again, and again, until killed at the roots, a process that can take years.

Knotweed seems to have displaced ragwort as the Irish plant world’s public enemy number one, although now that I mention it, I don’t recall seeing much ragwort on the roads I walked. Or maybe it was so commonplace as to be invisible to me. There were certainly no signs warning of its presence.

As a boy, I used to be delegated every summer to cut the bumper crop of it on a hill behind our house. That must have been counterproductive too. A fully indigenous pest, the buachalán buí, as it’s known in Irish, has powers of reproduction to rival the knotweed, with thousands of seeds in every felled plant.

Also, when cut and left to lie, ragwort loses the bitter taste that might warn horses and cattle not to eat it and risk a painful end. But there were never any horses on our hill, and the cows were usually in transit there, going to farther fields or coming home.

So I suspect the reasoning behind my annual hack-job was cosmetic. You could see the hill from the main road, crucially. And along with those other hunted criminals of the Irish countryside, thistle and dock, ragwort was proscribed under the Noxious Weeds Act (1936) on pain of a fine.

In being delegated to cut it at least once a year, although I didn’t realise it then, I may have been following the footsteps of Stephen Rynne, the writer-farmer, who had been doing something similar decades before.

In his Green Fields: A Journal of Irish Country Life (1943), Rynne confessed: “Repeated and annoying visits from the personage known locally as the ‘Thistle Man’ cannot intimidate me into making more than a single cutting. And even this is a cutting strictly for show purposes: it consists of going over those parts of my farm which lie exposed to the road...”

Unlike ragwort, Japanese Knotweed was deliberately introduced to these islands by gardeners.

One of its English names, Hancock’s curse, fingers a man in Cornwall who was blamed for its arrival there. Its agent(s) in Ireland have avoided such infamy, although the anonymous writer of this newspaper’s gardening column, circa 1927, might be on the list of suspects.

That’s the first mention I can find of it in these pages, and in calling it a “handsome rogue”, the columnist seemed to acknowledge it was a security risk. In any case, the rogue has long since crossed the herbaceous borders into rural Ireland, where it has joined the ragwort, dock, and thistle on the run.

It its case, there has been no need to levy fines. At least in Britain, the plant’s supposed ability to penetrate walls and tarmac has led insurers and even mortgage providers to punish those who have uncontrolled knotweed as a guest.

But its notoriety may have outrun the actual damage it can do. Earlier this summer, researchers across the water suggested the plant’s bad reputation had been greatly exaggerated. There were even undertones of the Brexit debate, as an Irish member of the research team, Dr Mark Fennell, spoke of a need to educate people, “particularly in the UK”.

It would “break the laws of physics” if the plant could penetrate concrete, as some believed, he told this newspaper. We in Ireland could help “stop the spread of the myth and the fear”.

Ragwort has defenders too, of course. They argue that its toxicity has been exaggerated and that it is a great supporter of insects, especially moths. Like the thistle, it has also been celebrated by poets, from John Clare to Robbie Burns.

Only the third of the trio outlawed by the Noxious Weeds Act seems to be entirely without friends. Certainly, I have yet to hear a speech for the dock.

1 Brightest comet of the century visible in Irish skies for the next week
2 Monster or machine? Everything we know about coronavirus after six months
3 Pat Leahy: Fianna Fáil acting like a circular firing squad
4 US tours to Ireland: ‘No one wants to travel at this point’
5 Johnny Depp: Ex-wife or friend defecated in bed in ‘fitting end’ to marriage, court hears
Real news has value SUBSCRIBE