A conditional Troubles amnesty is worthy of consideration 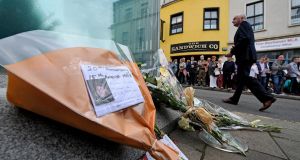 The 20th anniversary of the Omagh bomb, in the town centre. Twenty-nine people – including a woman pregnant with twins – died in the 1998 attack in the Co Tyrone town. Photograph: Photopress

The Commission for Victims and Survivors has invited organisations and individuals to make submissions on how to improve progress on ‘Legacy Issues’ stemming from the Troubles in which 3,700 people were killed and 40,000 injured. The deadline is today and, unfortunately, the process has been overshadowed by Brexit and the current paralysis at Stormont.

While there has been an understandable emphasis on the needs of victims in the conflict I believe that the one-sided approach pursued to date cannot succeed as it leads individuals and communities to embrace victimhood and apportion blame to members of the ‘other’ community, be it denominational, political, the security forces, or individual paramilitary organisations. Far from reconciling people to the past it reinforces existing prejudices and nurtures a continuing sense of grievance.

Whatever about the practicality of pursuing each and every case through the courts, by its nature such a process cannot lead to honest debate let alone reconciliation. Every court case is a battle and every acquittal or conviction is a victory or defeat for one side or other. Judicial inquiries by their nature are also costly, time consuming and selective - using scarce resources to focus on the most ‘important’ cases. These forms of legal combat are war by other means and preclude rather than facilitate the sort of debate we need if there is to be some form of closure to the conflict, not alone for individuals but society as a whole.

A conditional amnesty may not suit everyone and is likely to face strong opposition from legacy issue politicians and organisations that trade on perpetuating conflict.

On the other hand, a process of conditional amnesties based on perpetrators coming forward and agreeing to enter into meaningful engagement with victims can be an enabling experience for all concerned, including the wider communities affected. Former combatants coming forward to discuss their involvement in the conflict outside their own tribe or circle of intimate acquaintances could lead to a fuller disclosure of the facts and the circumstances of incidents for the victims and their families than any court of law.

It would facilitate greater understanding of the conflict for victims and perpetrators alike, while creating the circumstances in which forms of reconciliation may become possible.

This is a big ask to make of all concerned and it is by no means certain that it would succeed in any, let alone all of the cases involved. However, I think the current situation is even less desirable. Securing a conviction in the courts is of limited value to victims and an acquittal can inflict more pain. Not only that, but perpetrators found guilty of a crime may not necessarily feel any guilt or express remorse. A conviction may even raise their standing among their peers and token sentences are almost an accolade for some. In short, current British government opposition to amnesties ensures the continued incarceration of Northern Ireland in the past.

Yet, immunity already exists in relation to the recovery of bodies through the Independent Commission for Information Retrieval and this has proven one of the more productive initiatives undertaken to date. Hard though it may be for victims and survivors to accept the idea of an immunity scheme for perpetrators, most of them have a profound desire to know, above all, what happened and why. Some survivors of the earliest atrocities such as the Dublin-Monaghan-Dundalk bombings in 1974 are beginning to despair of ever finding out anything before they die.

The Attorney General for Northern Ireland, John F Larkin floated the idea of a general amnesty five years ago and it was condemned by politicians with a vested interest in promoting victimhood. A conditional amnesty should be explored as a ‘half-way house’ where perpetrators and victims may be able to engage with the past and with each other more productively than has been possible to date across ‘communities’, in which I include the security forces.

Not every perpetrator (or former combatant as many of them would probably prefer to be called) would wish to avail of a conditional amnesty, especially one that involves engagement with their victims. Nor would every individual or family who suffered from their actions wish to engage with them. But it does at least offer both groups a choice.

Such a process would need to be mediated and audited and it would be a coalition of the willing. Initially it could be on a pilot basis but we should not underestimate the power of example to initiate change. The threat of legal sanctions would of course remain for those who did not avail of the scheme but the reality is that the vast majority of cases will never be adequately investigated through the criminal justice system, and the clock is running.

Padraig Yeates is an author and historian. This article is an updated version of an article that appeared in the print edition of The Irish Times on September 10th. It is based on a submission to the Commission for Victims and Survivors