So you want a Swedish-style welfare state? That'll be more tax please 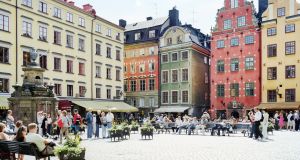 Square in Gamla Stan, Stockholm: If Ireland taxes like Swedes, the wealthiest will pay a little more, and everyone else will pay quite a bit more. The poorest will pay a lot more.

Éamon de Valera had his comely maidens and sturdy youths but if there is an ideal society fetishised in Irish politics it is modern, secular and Scandinavian.

This is not a new development. In everything from childcare to public transport to domestic insulation, the example of the Scandinavia has long been held up as the one to follow.

Every trade union leader extolled the virtues of the highly redistributionist, high public-spending model. If only we could be more like Sweden, the “beards” of the trade union movement ululated. Jokes about “Swedish models” abounded, when you could say that sort of thing.

It’s easy see why. The US economist Paul Krugman has written that the social democratic countries of the EU are basically the most civilised places in the history of the world. And when you think about it, it’s hard to argue with that.

People are fed up with what they see as the State’s inadequate role in housing, its creaking health service, its absence from childcare

When the king and queen of Sweden visited Ireland last May, President Michael D Higgins positively purred when praising Sweden’s ideas of a “morally inclined political economy” at a dinner in Trinity College.

In his book An Ireland Worth Working For (foreword by Higgins), the director of the Nevin Institute, a trade union backed think tank, Tom Healy, wrote that despite recent difficulties in the Scandinavian countries, it is hard to find a better model of how to run your country. “Would such a model work on the island of Ireland?” he asked. “There is no reason it should not.”

Healy speaks for a whole section of Irish political thinking. A government that works. A state that provides. A society that flourishes.

Yes, everyone knows the Swedes pay higher taxes. But sure don’t they get value for them? Be Swedish. Assemble your own furniture. Be happy.

Although the Swedish model is questioned a bit these days, the recent election campaign and result demonstrated that the desire to construct a more social democratic-style European state here is greater than ever – in many respects, it is the dominant school of thought in our politics. People want the State to do more. They are fed up with what they see as the State’s inadequate role in housing, its creaking health service, its absence from childcare and so on.

Ireland taxes its wealthiest citizens the same rate as its European peers, but taxes those who are least well off at a rate much lower than other EU states

All the parties understand this and are attempting to respond. I’ve been rereading the manifestos of the parties that will form the basis of the coalition talks and let me tell you: there’s a lot of stuff promised in there.

Our political debate rather glosses over the necessity to pay for all this. But a much greater degree of public provision of services and State participation in the economy will cost more money – a lot more money.

The manifestos are less clear on that point. As Governor Huey Long of Louisiana once (allegedly) said, “Don’t tax you, don’t tax me, tax that feller behind the tree” – in other words, anyone else. Fine for an election campaign, but governing requires actual resources, actual revenues. So who to tax?

Well, what do the Swedes do?

This week, the EU statistics agency published a report on how European countries pay for their societies – for their public provision, health services, defence, welfare, pensions, etc. The numbers demonstrated what we already know, but what often gets ignored in political debate: Ireland taxes its wealthiest citizens at roughly the same rate as its European peers, but taxes those who are least well off at a rate that is much lower than other EU states.

The picture has another important message – the share of direct and indirect paid by households in Ireland rises steadily as you progress through the income quintiles: the more you earn, the greater the share of that income you pay. In other European countries, the share of your income you pay varies much less.

There are many qualifications and caveats to this, of course: not least the fact that lower-paid people in Ireland pay for services that they might get for free (or much more cheaply) in other countries, and also the level of inequality in pay is very high here. But the essential truth of it is clear in the rows of numbers.

More services will be more expensive. And as University of Limerick economist Stephen Kinsella observed this week, if we move to a Scandinavian model of service provision, it wouldn’t just be the rich who’d pay more. I see little acknowledgment of that in the government-formation process.

1 Coronavirus: Restrictions resulting in ‘huge’ fall in rate of infection growth
2 A letter to Ireland from Italy: this is what we know about your future
3 Ireland ‘squanders’ geographical advantage with different Covid-19 stances North and South - Scally
4 Gabriel Scally: North and Republic must harmonise Covid-19 response
5 From yoga to HIIT training, your guide to solitary exercise
Real news has value SUBSCRIBE