Conor Lenihan: Varadkar’s clumsy leaking may yet be his undoing 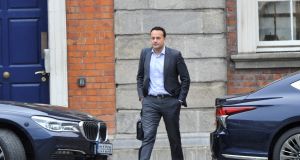 The ultimate sin for a minister who leaks is to get caught. The former Taoiseach and current Tánaiste Leo Varadkar learned this lesson the hard way after Village Magazine published details of how he gave a confidential document to a friend Maitiú Ó Tuathail who led a rival organisation to the Irish Medical Organisation - whilst the latter were in sensitive negotiations with the government about their payment rates from the state.

While the resulting Sinn Féin-sponsored no confidence motion in Varadkar was easily put down on Tuesday by deputies from the three party coalition the controversy has undoubtedly damaged Varadkar and caused problems. There is a certain nervousness amongst government deputies about the whole ethical minefield created by the coincidence of Varadkar’s difficulties and the hospital pass from the Chief Justice Frank Clarke to the government in relation to Seamus Woulfe’s ongoing membership of the Supreme Court after his controversial attendance at the, by now notorious, Oireachtas Golf dinner in Clifden, Connemara. Woulfe was Varadkar’s Attorney General and legal confidant when he served as Taoiseach.

Fianna Fail’s Barry Cowen - who lost his cabinet seat early in the life of the coalition in a controversy surrounding his conviction for drink driving - was surprisingly kind to Varadkar when the story broke; characterising the transgression as not being a resigning matter.

Solidarity–People Before Profit deputy Paul Murphy was less forgiving during the no confidence motion debate, stating it was a possible breach of a section of the Corruption Act. Varadkar looked distinctly queasy as Róisín Shortall of the Social Democrats calmly cut the ground from under his public interest defence of the leak. Fine Gael contributions tended to focus on attacking Sinn Féin for hypocrisy rather than dealing with the substantive issues involved.

There is a certain sympathy in the media, with the exception of Village Magazine, for Varadkar’s plight. After all virtually every Minister and deputy in Leinster House has leaked on occasion.

Most ministers in my experience, as both minister and a career journalist, are meticulous and careful in how they plan a leak. Full documents are rarely passed over and certainly not by email, WhatsApp or through the conventional post as Varadkar appears to have done. The main point of a ministerial leak is to keep your metaphorical fingerprints off the leak.

But Varadkar’s leak to Ó Tuathail, a GP and the president of the National Association of General Practitioners looks hamfisted, amateurish and foolish. The WhatsApp texts that bounced back and forth between Ó Tuathail and the then Taoiseach resonate with the over familiarity of a boy’s night out. It is this combination of insiders, texts and documents marked ‘Private & Confidential’ that lends this controversy a degree of gravity.

In my experience known ministerial leakers become the object of suspicion and distrust from colleagues. They also suffer in terms of influence as they get blamed for other leaks not of their own making.

Varadkar might be better served by adopting a more humble tone and stopping his endless spinning of government business to the disadvantage of his coalition colleagues. There has been unease within Fianna Fail about this and the sly insinuation from Fine Gael quarters that Varadkar is the real Taoiseach. Hardly a surprise therefore at the absence of passion on the part of Micheál Martin when it came to the confidence motion defence. There were precious few of Martin’s colleagues in the chamber for the debate.

Members of Fianna Fail have been complaining privately about the speed with which Martin threw his own colleagues - Cowen and also Dara Calleary who attended the unfortunate Clifden dinner - under the bus but appears to have turned an ethical blind eye to Varadkar’s misdemeanours.

Despite the obvious tensions between the coalition partners they are still most unlikely to break up. If for no other reason than fear of Sinn Féin this coalition will run its course.

However two or even all three of its leaders are vulnerable to being replaced within the government’s lifetime. To date Varadkar’s luck has held but the real danger is that further revelations of this kind will seriously damage him.