Everybody knew there was going to be bother in the North

Eamonn McCann: Conditions that spawned New IRA have not gone away 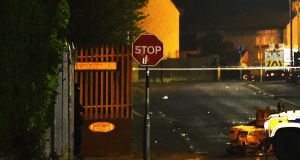 The scene at Fanad Drive in Creggan in Derry where Lyra McKee was shot dead. Photograph: Trevor McBride

The events which were to culminate in the killing of Lyra McKee began with plans for a commemoration of the Easter Rising.

Saoradh, widely taken to be the political wing of the New IRA, had announced a march from the Creggan to the Republican plot in Derry city cemetery on Easter Monday for the traditional reading of the Proclamation, a message from the movement’s “military” leadership, a rendition of the national anthem.

If the march had gone ahead it wouldn’t have attracted a big crowd – a colour party in combat fatigues, a band piping rebel tunes, a straggle of followers, mostly young. A couple of hundred souls at most. In other circumstances, hardly anybody would have noticed.

The march would have been illegal. To have asked Stormont’s parades commission via the Police Service of Northern Ireland, as required in law, for permission to march to the republican plot at Easter would have been seen and felt by Saoradh as shameful.

The PSNI will have been aware that if they weren’t seen to make a determined effort to stop the march, they would be lashed by every unionist party and faction in the land.

Everybody knew there was going to be bother. In the days leading up to Lyra’s death, there was a shimmer of anxiety in parts of the town. The bother, as always, would more or less exclusively have involved young people.

Memory was unsettlingly fresh of the New IRA car bomb outside the Bishop Street courthouse in January which had come within a hair’s breadth of blowing a passing group of teenagers to bits. The action had been intended to mark the centenary of the Soloheadbeg ambush in January 1919, generally taken as the opening shots in the War of Independence.

The perpetrators of Soloheadbeg had had no mandate of any kind. But their killing of two policemen was recalled this year with reverence at gatherings attended by senior political figures.

Young people find themselves entitled to nothing at all unless, bizarrely, they can show that they have been 'actively seeking work' for 35 hours a week

Saoradh’s purpose is to keep up the fight in the knowledge that many who will loudly condemn them speak with forked tongues.

A few years ago – the 32-County Sovereignty Committee was the main “dissident” group in Derry at the time – I talked with a group of maybe 35 young people gathered in late evening on a piece of open ground in the Carnhill estate. There was much concern about “antisocial behaviour” at the time. We talked about this for maybe 10 minutes, getting nowhere.

As I walked away, a youth called after me: “At least the 32s are still fighting, McCann!”

Not, by implication, fighting for justice or freedom or for the Republic – but fighting, fighting back, sticking up for themselves, having a go.

Young people in deprived areas everywhere tend to have a hostile relationship with the police. In the North, this hostility becomes readily politicised. In the Creggan, the Bogside, Carnhill, the idea of taking on uniformed representatives of the state fits easily into attitudes and perceptions advertised by adults as expressing the will of the community.

Portraits on walls around the area of IRA volunteers who died in action implicitly endorse the notion that fighting authority is fair enough. The hurling of petrol bombs which preceded the pistol shots which killed Lyra McKee began when police apparently searching for paraphernalia associated with the planned commemoration, emerged from raiding a house on Fanad Drive.

It is not axiomatic, as has been assumed in many quarters, that Saoradh/New IRA organised this initial attack as cover for opening fire. There may have been no need.

Many young people in the Creggan reasonably believe that, for all the talk of a new generation’s new attitudes and the promise of “moving on” to a brighter future, their own situation is not getting better but, if anything, getting worse.

More than half (54 per cent) of the population of the electoral area which includes the Creggan have low or no qualifications. There are people with degrees on Sainsbury’s checkout. What chance a start with no A-levels?

Welfare reforms brought in by the Conservative government and passed on by Stormont have pushed many young people out of the benefits system entirely. They find themselves entitled to nothing at all unless, bizarrely, they can show that they have been “actively seeking work” for 35 hours a week. Some simply stop registering.

The state agencies have lost track of 40 per cent of those leaving the register. Literally, a lost generation.

The whoosh of yearning which greeted the words of the presiding priest at Lyra McKee’s funeral on Wednesday was heartfelt. But it’s doubtful whether any of it was heard by youngsters lurking in the shadows, looking for aggro.

In the wake of McKee’s death, there may well be more support for the PSNI in traditionally nationalist areas. Saoradh and the New IRA may be on the brink of disintegration. But the conditions which have cast thousands of young people beyond the reach of respectable society haven’t gone away.

5 Ireland’s young adults on dating, youth-blaming and being bored