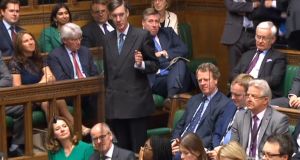 Conservative MP Jacob Rees-Mogg: engaging in a tactic to try to blame somebody else for the consequences of Brexit. Photograph: PA

In the long-running British TV show Call My Bluff , one team of “celebrity” contestants presents an obscure word and gives three competing definitions, two of which are bluffs and one true. The other team must guess whether the word in question is, say, a lesser-known type of grain, a piece of equipment used in lacrosse or a Venezuelan sea eagle.

Jacob Rees-Mogg’s claim that the UK should “call Ireland’s bluff” on the question of the Border after Brexit is surely, itself, a bluff. It is a tactic to try to blame somebody else for the consequences of Brexit. And it is relevant because it shows the pressure Theresa May is under from a wing of the party which continues to claim, albeit a bit less loudly these day, that Brexit can be a success and that the UK can have it every way.

9 Evolved to run – but not to exercise

10 Brexit: EU and UK negotiators to resume talks in ‘last throw of the dice’

18 Viggo Mortensen: It ‘felt awkward’ replacing Stuart Townsend in Lord of the Rings

19 Is Ireland ready for the Covid-19 vaccine?

22 Doctors ‘shooting themselves in foot’ by campaigning against FG, Varadkar texted Ó Tuathail

23 The history wars: A new battleground in Irish politics

25 The word of the year is defined as ‘watching Normal People in your pyjamas’. What is it?

27 Fintan O’Toole: All the main actors in the Troubles tell partial, distorted and deceitful story

28 David McWilliams: Start building and don’t stop until we have all-island transport

29 Helen McEntee announces she is pregnant

30 Dublin won’t be getting all those hotels after all

31 Val McDermid: ‘There will be a united Ireland within five years’

32 Jennifer O’Connell: Is it time woke culture was cancelled?

36 Ross O’Carroll-Kelly: ‘One of your Three Wise Men stuck his middle finger up at me’