Citizenship ruling leaves me and thousands of others in limbo 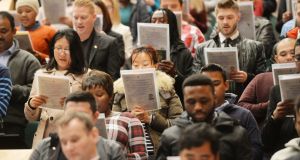 Less than a month ago, Minister of State John Halligan told new Irish citizens at a Waterford citizenship ceremony Ireland is “a place of diversity, openness, warmth and welcome” and “our doors are always open to all peoples from all over the world”.

They seem a little less open now following the High Court ruling on July 17th that anyone applying for citizenship cannot have have spent a day outside Ireland in the previous year. The Minister for Justice’s discretionary practice of allowing applicants six weeks out of the country was not permitted under the legislation, Mr Justice Max Barrett ruled.

The ruling is being appealed but it makes Ireland seem a withdrawn and parsimonious place, in which the welcome the Minister mentioned is theoretically available but practically impossible. It calls to mind a child making up rules to a game, such that the other player can never win. This is not the country I know.

I had been set to submit my application for Irish citizenship on July 17th – the day of the “continuous residence” ruling. My partner and I had punched the numbers late in 2017, and we decided to go for it. My freelance work abroad meant that I had marginally exceeded the five-year limit on absences, but I dutifully stuck to 42 days over the past year, as our solicitor advised that this element was the most crucial.

She was also optimistic that the case which gave rise to the ruling – taken by Australian academic Roderick Jones – could improve our chances: the limitations might be deemed too restrictive in the era of digital nomadism, budget airfares, international families and so on. The challenge could be good news for me, she said.

It was bad news. I don’t need to explain why being asked not to leave a small island – the southern chunk of it, at that – for an entire calendar year is absurd. I have clients in the UK, ageing parents in the United States and seasonal affective disorder to boot (if you have time for things like that).

But it’s the logistical piece, even more than the restriction itself, that kills me. Thousands of recent and would-be applicants are left in limbo, having no idea what the future absence requirements will look like or when they will change. We must weigh our forthcoming travel priorities against a stack of unknowns (and the fact that applying involves giving up your passport for a period of weeks).

It seems futile to play by the painstaking new rule that will almost certainly be overturned, but it’s difficult to know what else to do. Do we apply now and hope for the best? Cancel travel and wait for the appeal, which is scheduled for October 8th but might not be heard then, unless new judges are appointed.*

Or is it better and more sane to throw in the towel on citizenship despite the challenges it took to get to this point, because people we love are getting married or having babies in other countries and we want to be there?

It’s impossible to plan. Even if I decide to stay in Ireland (in the court-defined way), there’s a chance the appeal wouldn’t do me any good, as new rules may not accommodate the days of absence I’ve already accrued. I feel like a runner who has trained and raced a 10k, only to be told at the finish line that I possibly didn’t run the right course – so just keep running, would you, until we’ve discussed it? It might be 2021.

At a stretch, you can see what Mr Justice Barrett is trying to do. The legislation says applicants must be continuously resident. Continuous according to the Oxford Dictionary of Current English definition cited by Mr Justice Barrett, means “unbroken, uninterrupted, connected throughout in space or time”.

The Minister does not have discretion to allow people applying for citizenship to leave the county. If he wants it, he has to change the law. As Mr Justice Barrett put it, the cure for any such unfairness “lies in the gift of the legislature”.

You could almost admire the stodgy integrity of the court were it not for the day-to-day struggles it introduces for people .

The Government must intervene to pass emergency legislation, stating both the parameters for application and the level of discretion, as soon as possible after the summer recess (September 17th).

Time is a precious thing to waste, and this is what is being asked of those who are trying to belong to Ireland while also managing their lives, families and work commitments. While there are unquestionably more urgent priorities in the political sphere, it feels farcical that thousands would be left to simmer in this weird cocktail of logistics until the courts have enough time and judges to sort it out.

The Minister’s doors indeed seem to have shut. Still, I’m hopeful. If Ireland is the country I think it is – the country of “very real humanity”, of looking after each other, of rationality and reason – it’ll open them again, and quickly.

Kathryn Phelan is a US writer and has lived in Dublin since 2012.

*An earlier version of this story said in error the appeal was going to the Supreme Court. It will heard by the Court of Appeal.

1 Donald Trump's taxes: US president paid $750 federal income tax the year he won the election
2 ‘I never suspected that, aged 29, I’d be lost’
3 Covid-19: Possible extra restrictions for four counties to be decided by weekend
4 Graham Norton: ‘I wanted out, out, out of Ireland’
5 More than 30 people queue overnight to secure property in Carlow
Real news has value SUBSCRIBE