An Irishman’s Diary on a 51-year journey into Irishness 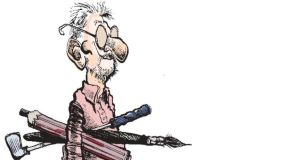 “The cartoonist has come in from the cold.”

I have it on good authority – that would be me, myself – that The Irish Times has been peddling fake news from time to time these past 5 decades. Every time I have written an Irishman’s Diary, and I write up to two every year, they have blithely titled it “Irishman’s Diary” knowing full well that I am, and always have been, fee-fi-fo-fum, an Englishmun.

Admittedly the Turner family have been equally remiss, feeding me a tissue of fabrications about my genealogy that might be described, at best, as Trumpian.

I fled London for Belfast in September 1967. I fled back, after my first term at Queen’s, to London for Christmas. “How do you like Belfast?”, asked my Grandmother. “Bit grim,” I replied. “I was born in Belfast,” said my Grandmother. “Really? I thought you were East End through and through.” “No,” she said. “I was born on the Falls Road. Me and my three sisters and eight brothers.”

I believed her. Why wouldn’t I? She was my Grandmother and who, in 1967, in Hackney, East London, pre -Troubles, would have heard of the Falls Road unless they were born there?

I put this fact in an introduction to one of my books and it made its way, in the fullness of time, into my entry in Wikipedia.

In June 2016, Herself, who had joined me in Belfast in 1968, suddenly took to hurling things at the television and using language quite unbecoming a bride, of however many years standing. The Brexit referendum vote was in. She loathed, detested, disliked, was appalled and deeply shocked that anyone would be inane enough to vote for Brexit, and furthermore make those of us who still retained a British passport pariahs to the best political advance made in our lifetime, the European Union.

Even though we had lived in Ireland for 48 years at that stage (51 years now) we had never bothered to make our de facto status – “You’re the people from Ireland” we’d get at every cartoon festival – into the de jure status of actually being Irish.

“You’ll be all right”, Herself said, “with your Irish grandmother”.

Indeed. As it happened a distant cousin on my father’s side had been investigating our shared family tree. So I asked her for my Grandmother’s details. Annie Cash, born Poplar, East London. Father John Cash, believed to be, as my distant cousin put it, “an Irish gypsy”, mother Emily Bragg.

“Wha?” She wasn’t born in Belfast. Still, there was one good thing to come out of it. My memoirs can now be titled “I was Johnny Cash’s Great Grandson (and his father- in-law was Billy Bragg)”. It might get reviewed in Hot Press.

So I joined Herself in the aliens section of the Irish population and asked her, would she mind, while she was gathering up all the bumf necessary to apply for Irish citizenship for herself if she would do the same for me.

While she did the sensible stuff I continued to trawl the internet for Irish links. I discovered I was born in the same place as John Stephenson who grew up to be Seán Mac Stíofáin, head of the IRA in the late 1960s, but that wouldn’t be much of an argument to sway the Department of Justice in its deliberations on my case.

I checked my mother’s family. Generations of artisans from the East End of London. Printers, warehousemen, carpenters, scrap-metal dealers. It would get me embraced by the Labour Party but little else.

Then, as my mother’s maiden name was relatively rare, I found two cousins I’d forgotten that I had. One of them writes and has a website so I got in touch with him. He confirmed he was my long-lost cousin and also confirmed that we had no links with Ireland whatsoever, other than his brother, my other long-lost cousin, who plays and sings Irish folk songs in various venues around New York state. We plan a reunion soon. Thank you, Brexit, without whom . . .

So that was it. A voyage of discovery of no practical value. Meanwhile the sensible side of this partnership had sent off a large box of documents and cheques and bank drafts to the Department of Justice and, lo and behold, a year later we have been invited to become Irish.

The Irish Times will no longer peddle fake news about me.

As you read this we will be down in Killarney with a few thousand other souls glowing in our newfound nationality and wondering if the person two rows behind us and across a bit with the cough has been in northern Italy recently.

The Department of Justice has made honest Irishpeople of us both. Thank you.

The cartoonist has come in from the cold.

1 Aaron Brady, the man who said with pride he was a cop killer
2 Staycationing just means paying too much to sleep in someone else’s uncomfortable bed
3 Aaron Brady found guilty of capital murder of Det Garda Adrian Donohoe
4 Coronavirus: 40 new cases and one more death confirmed by Nphet
5 A chronicle of dignity and despair
Real news has value SUBSCRIBE