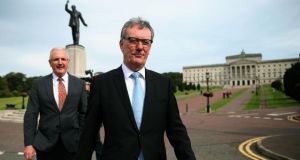 ‘A recent Belfast opinion poll suggested a majority in favour of Mike Nesbitt’s action in pulling his Ulster Unionist party minister out of the Stormont executive. That was a clear illustration of widespread exasperation at the performance of the political classes.’ Above, Mike Nesbitt (right) after speaking to the media at Stormont in Belfast on Monday, September 14th. Photograph: Brian Lawless/PA

Few things are certain about the peace process, but one thing seems sure enough in the latest crisis: that the Assembly which now requires yet another rescue operation is held in low regard by large swathes of the northern public at large.

Ask people in the street how they feel about Stormont and many will say “waste of time”, “bunch of clowns”, “useless at running a government”, “unproductive but grossly overpaid”, “dysfunctional”, “unfit for purpose”. Quite a few think it should just be closed down.

A recent Belfast opinion poll suggested a majority in favour of Mike Nesbitt’s action in pulling his Ulster Unionist Party Minister out of the Stormont executive. That was a clear illustration of widespread exasperation at the performance of the political classes.

It is against this unpromising background that the latest salvage operation got under way in Belfast yesterday following weeks of a steadily mounting sense of crisis.

It will be a surprise if all goes smoothly, for these recurring operations generally feature a fair bit of bluster and posturing, particularly on the unionist side. Arlene Foster, the DUP’s acting First Minister, was in line with tradition when she last week defined her role as a sentinel against “rogue Sinn Féin or renegade SDLP Ministers”.

At times in the last few weeks it looked as though the Assembly might be doomed, and indeed it still might be, for the gulf is wide between its dominant parties, the DUP and Sinn Féin. The issue of the IRA’s existence is particularly neuralgic, a term whose political use fits well with its medical definition of “a sharp and paroxysmal pain along the course of a nerve”.

It is hardly likely Sinn Féin will meekly shift from its unwavering insistence that the IRA simply went away some time ago: most in the North have always assumed, with pragmatic shrugs, that it had been much diminished but had never become entirely extinct. But a public confession, delivered under unionist pressure, that Sinn Féin had been lying for years would require an impossibly mortifying climbdown by republicans.

At the same time, unionist politicians are hardly likely to be satisfied with mere assurances from Sinn Féin, however solemnly delivered, that the IRA has gone into the history books. There is too little trust between republicans and unionists for that to stand a chance of working.

Even if this idea is taken up, Belfast talks are never straightforward. Some weeks have been set aside for them and there will be many difficult details to be thrashed out. Belfast parties love the limelight, and some of them love the politics of the walk-out. There could be a breakthrough but there could also be continuing deadlock.

Many will question why Sinn Féin and the DUP might prove flexible and pragmatic enough to consider some such mechanism as a way out of the present crisis, which also encompasses a separate long-standing impasse over budgets and welfare reform. It would all depend on how much the two parties value the Assembly, and there are signs that neither wants to shut down an institution which took long pain-filled years to construct.

Making concessions to rescue it will be awkward but in terms of public opinion not impossible: that recent opinion poll suggested that, although many are irritated by the Assembly, more than two-thirds of nationalists, and about half of unionists, regard it as valuable. Even in these doom-laden times, there is wriggle room.

For its part, the DUP has shown by its actions it will go to some lengths to avoid closing it down, adopting instead the convoluted manoeuvre of withdrawing some, but not all, of its Ministers. It would hardly have adopted a tactic, which the party has described as messy and ugly, if it were not anxious to keep Stormont alive.

Another factor is that both the British and Irish governments are becoming much more deeply involved in the peace process after years in which, northern parties complain, they took their eye off the ball. Whereas Tony Blair and Bertie Ahern devoted time and effort, David Cameron and Enda Kenny, they grumble, largely tuned out and let things slide.

The talks could fail, but the fact the two governments and the two big parties would all prefer to keep Stormont means it has at least a chance of survival.

David McKittrick is a journalist and author. He is co-author of Making Sense of the Troubles