Britain at crossroads, in danger of stumbling into a breakup 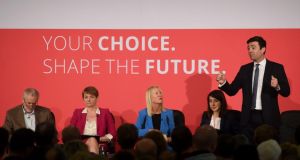 ‘Can we still save the union?” Stephen Heseler asks the question in a pamphlet published by the Federal Trust in London, entitled The United Kingdom, Federalism or Bust? He says the UK is on the brink of breaking up unless there is an intellectual revolution among its political elites about its constitutional future.

With leadership and good luck, that would help them give up the addiction to absolute sovereignty that has fuelled Scotland’s revolt against the UK’s centralised state.

Despite renewed interest in constitutional change among parties and civil society across the UK after May’s general election, there is little sign that such a revolution is under way.

The Conservative government is committed to renew the union – “showing respect for all parts of our country, while recognising that we are stronger together in the UK”, as David Cameron puts it.

A Scotland Bill proposes deeper devolution, while chancellor George Osborne will give more powers to northern city-regions in next week’s budget.

The Labour Party is still in deep shock after its defeat and the UK’s future figures little in its current leadership contest. There are stirrings regarding Scotland, including a restructured Labour Party there and proposals to found an English one too. But some of those involved say the party is “brain dead”, incapable of recovering soon and very short of constructive ideas – including on the northern city-region proposals that would empower its own leaders there and could devolve power within England away from the over-powerful and wealthy London.

Behind these discussions looms another on the UK’s first-past-the-post voting system for Westminster elections. The Conservatives were elected on 25 per cent of the electoral roll and 37 per cent of those actually voting, in an evident crisis of legitimacy.

Both main parties are loath to change a system that so benefits winners and underpins Westminster and Whitehall centralism. But if the Conservatives face a potential split on the outcome of the EU negotiations and if Labour thinks it cannot get a majority having lost Scotland to the SNP, they could find common cause in changing the system.

Federalism, best defined as a combination of self-rule and shared rule, is losing its toxicity among these commentators – if not among the Eurosceptic media.

A federal scheme is needed, they say, to hold the UK together now that the bonds of empire, war and welfare have eroded and the identity politics of Scottish and English nationalism are taking its place. The government’s proposal on Thursday for English votes on English laws illustrates the difficulties involved. More robust democratic underpinnings are required, which these movements express.

Its main work would be to draft a written constitution defining governing tasks at UK, national/regional and local levels; specify new rules for social cohesion and economic transfers based on need; create a ministerial council and an inter-governmental machinery to administer the federation; transform the House of Lords into a territorial chamber; create a supreme court; and agree on national/regional representation at EU level.

Muddling through incrementally by ad hoc devolution without an overall strategy could sleepwalk the UK into ungovernability or break-up, they argue. Such a process hollows out its socio-economic cohesion by growing inequalities and substitutes market and partisan competition for co-operation as the governing norm between its parts.

But whether there is a political will among the existing Westminster elites to agree on a constitutional convention and then to take such a federal path is deeply questionable. Without that will, Britain is in danger of stumbling into a break-up rather than holding together.