Like fellow Glastonbury headliner Corbyn, Jagger is jumping on the bandwagon 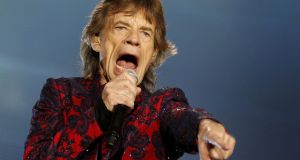 Mick Jagger: both he and Jeremy Corbyn are frauds when it comes to Brexit. Photograph: Henry Romero/Reuters

In the days following Theresa May’s triggering of Article 50 last March, Mick Jagger sat down to write a pair of songs that would capture “the anxiety and the unknowability of a post-Brexit UK”.

The songs – England Lost and Gotta Get A Grip – were released last week. They are both hideous. It behoves a future generation to commemorate in musical form that the day Sir Michael Philip Jagger got “woke” about Brexit was the day that rock music died.

“I went to find England, it wasn’t there. I think I lost it in the back of my chair. I think I’m losing my imagination. I’m tired of talking about immigration,” sings Sir Mick over a beat that could only charitably be termed as “funk-like”.

The realpolitik of Brexit is addressed in the final verse of England Lost: “I had a girl in Lisbon, I had a girl in Rome, now I’ll have to stay home.” Which is as cutting a take on the EU’s freedom of movement directive as you are ever likely to hear.

With lyrics on the two songs about fake news, lunatic political leaders, refugees, Isis and, everyone’s favourite, metadata scams, Jagger has been saluted by a supine music press for becoming “politically charged” and “capturing the zeitgeist”.

Whenever a figure from the world of showbiz or politics (and the distinction is now blurred) engages with a political talking point for profit – commercial or otherwise – we need to see receipts.

Jagger may be “anxious” about Brexit now but just a few weeks before the EU referendum last year he was a lot more sanguine about it, telling Sky News that Brexit would be “beneficial” to the UK in the long-term.

But as a vocal supporter of Margaret Thatcher – so much so that he held private meetings with her when she was in office – he would think that way about Brexit.

His concern about England on his new songs is touching. This is the England he ran away from to take up residency in France in 1971 when the then Labour government’s tax regime didn’t suit his enormous bank account.

And he’s kept running: since the 1970s the Rolling Stones have had their multi-millions managed out of Amsterdam to reduce their tax. It’s working out quite well for them. Figures released in 2006 showed the Stones paid $7.2 million in tax on earnings of $450 million – a rate of 1.6 per cent.

It’s just as well that paying a drastically reduced tax rate on your earnings in a foreign country for most of your career doesn’t disqualify you from writing “politically aware” songs about your own country.

Like many a rock star Jagger would do anything for his country – except pay tax in it.

In the idolatrous world of showbusiness you can say or do what you want with impunity – no matter how inconsistent or hypocritical your words or behaviour may appear to be. The political world is more circumspect – or used to be – according to Simon Kuper of the Financial Times, who last week cast a cold eye over “the rise of the political fan”.

He writes: “Donald Trump and Jeremy Corbyn have fans, Hillary Clinton and Theresa May don’t. The political fan is a poorly understood modern phenomenon. Political fans reason a lot like sports or music fans.”

Corbyn’s rapturous reception at this year’s Glastonbury Festival is described by Kuper as “an event unprecedented in British political history”. At Glastonbury 2016, many festival-goers wept openly on the Friday morning as the EU referendum result filtered in.

This year, not only did Corbyn receive a hero’s welcome while speaking on the main stage but over the three days of the festival crowds spontaneously broke into chants of his name. There was more than a touch of the Papal Mass in Phoenix Park about it.

Like Jagger, Corbyn is seasoned campaigner who knows how to artfully dissemble. Addressing the Glastonbury crowds, he was touchy-feely in excelsis – “in every child there is a poem” – before erupting into paroxysms of platitudes about the environment, peace and love. He didn’t once mention the ‘B’ word – the word that had reduced Glastonbury to tears the previous year.

But when he was talking to the grown-ups on an ITV political show just weeks previously, he outlined in stark terms how he wanted a hard Brexit and how “clearly the free movement of people ends when we leave the European Union and there will be managed migration”. The dog-whistle term, “managed migration”, has been in every UKIP manifesto since 1999.

As with Jagger on his new single, Corbyn is opportunistically and cynically “getting down” with the youth vote without disclosing some important facts – such as that Jez’s voting record on the EU is up there with the rabid right of the Conservative Party and has drawn effusive praise from Nigel Farage.

In Britain’s previous referendum on EEC membership in 1975, Corbyn voted to leave. He was one of the architects of Michael Foot’s 1983 Labour manifesto which promised to pull the UK out of the EEC “immediately”. He voted against the Maastricht Treaty, against the Lisbon Treaty and in 2011 crossed the floor to vote with hardline Tory MPs in calling for an EU referendum.

In March of this year, he imposed a three-line whip on Labour MPs to prevent any of them from voting against Theresa May triggering article 50. Back in the day, we used to call that democratic centralism.

That article 50 vote brings us back to Jagger and the reason he wrote his Brexit blues. Born within a few years of each other in the 1940s, Jagger and Corbyn were nice middle-class boys who went to grammar schools.

If for one the future held sex, drugs and rock’n’roll, the other had to make do with fair-trade coffee, protest demos and speechifying.

But both headlined Glastonbury. And both are frauds when it comes to Brexit.

I’m sorry to hear you’ll have to give up your girl in Lisbon and your girl in Rome, Mick, but as you said yourself, Brexit could be beneficial in the long term.

And Jez, there is indeed a poem in every child. Even the migrant ones you intend to manage.