Breda O’Brien: Francis needs to answer the questions and fire bishops who cover up abuse 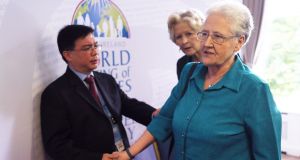 Victims advocate Marie Collins (right) with Prof Gabriel Dy-Liacco of the pontifical commission for the protection of minors (left) at the World Meeting of Families at the RDS in Dublin last week. Photograph: Brian Lawless/PA Wire

With a few exceptions, Christianity is slowly dying in the developed world. There are lots of reasons but the failure by the Catholic Church worldwide to act decisively, courageously and truthfully in relation to sexual abuse of children and vulnerable adults is an important and tragic factor.

This damage is entirely self-inflicted. As Bishop Robert Barron, auxiliary bishop of Los Angeles and one of the most popular speakers at the recent World Meeting of Families said recently, “Maybe 50 years ago, people didn’t quite understand but if we don’t understand it now, we’re blind, deaf and stupid. Lives were shattered, broken, destroyed by these acts, so I think it is important for us to name them as crimes of sexual assault and sexual violence.”

He went on to endorse strongly the call by Cardinal Daniel DiNardo, president of the US Conference of Catholic Bishops, for a national lay commission to be granted independent authority to investigate, first of all, the McCarrick scandal. There were credible claims of abuse not only of seminarians but of minors; yet, despite these allegations, McCarrick was appointed a cardinal.

Archbishop Vigano claims that Pope Francis knew about McCarrick but that he continued to cover up. He calls for the Pope’s resignation. He also names lots of other highly placed churchmen in a very damaging fashion. Cardinal DiNardo says that the allegations need answers, because “without those answers, innocent men may be tainted by false accusation and the guilty may be left to repeat sins of the past”.

The Irish Conference of Bishops needs to endorse strongly this call by the US bishops for investigation and action, including a transparent mechanism of accountability for bishops and those who work in the Vatican. They should not accept silence as an answer from the Vatican. Otherwise, the Church will continue to bleed from hundreds of self-inflicted wounds.

It was beyond frustrating to hear Pope Francis say on the plane back to Rome that he loved Marie Collins, herself a survivor of clerical abuse, but that she was “fixated” on a particular mechanism of accountability for bishops.

This is deeply unfair. As Collins has repeatedly pointed out, on June 10th, 2015, Pope Francis approved a mechanism of accountability for bishops drawn up by the Vatican Commission for the Protection of Minors and promised it all the resources it needed.

Within months, the Pope declared that there were already mechanisms in place and there was no need for a new body.  And yet there is still no investigation into McCarrick.

And it is really shocking to see some people saying that the allegations about minors were not known at the time, as if it somehow makes it better if McCarrick were abusing only young seminarians. His predations were a classic abuse of power.

I cannot begin to describe how angry, fed up and broken-hearted ordinary Catholics are. We need answers; and, more importantly, we need action and we are not getting much of either.

And the last thing we need is some kind of Catholic culture war, where people believe or do not believe Vigano’s allegations based on what they think of Pope Francis, not on whether they are true or not.

Sexual crimes are found on all sides of the ideological divide. One of the most terrifying cases, which reeked of evil, was the case of Marcial Maciel Degollado, founder of the Legionaries of Christ, an organisation known for its doctrinal orthodoxy.

Maciel was a serial abuser and had two separate families and six children, all while claiming to live a celibate life as head of the Legionaries. He was eventually brought down by Charles Scicluna, now archbishop of Malta, and sentenced to a life of prayer and fasting by Pope Benedict.

Theodore McCarrick is firmly on the liberal wing of the Church, but he had something in common with Maciel – both were phenomenal fundraisers. Could it really be as tawdry and shabby as it looks? That their fundraising ability helped them escape challenge?

I love what the Pope has to say about refugees, migrants, the economy, the poor, the environment and his constant championing of the right to life of the youngest humans. But the Church’s ability to bear prophetic witness to these values – the ones championed by modern liberalism and the ones despised by it – is being fatally undermined.

Ordinary Catholics, profoundly aware of their own weakness and failures, but nonetheless struggling to be faithful to the message of Jesus, are close to despair.

We need Pope Francis and Pope emeritus Benedict XVI to answer in full the allegations posed by Archbishop Vigano. Francis must give due process to and then fire bishops found guilty of cover-up, in order to show that even belatedly, the Church understands that nothing except the whole truth will do.

I can think of two names for any lay-led commission of investigation – Marie Collins and Nuala O’Loan, both women of courage, compassion and unwavering integrity. Please, Pope Francis, for all our sakes, let the light finally shine in.