Boris Johnson has set his course for a Brexit trade deal

EU Commission president Ursula von der Leyen has announced that the EU and the UK has agreed to continue Brexit negotiations in Brussels. Video: EU Commission 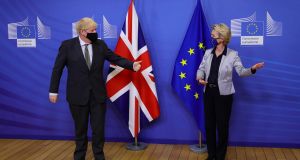 An hour after he agreed with Ursula von der Leyen to continue trade talks beyond their latest deadline, a grinning Boris Johnson tried to sound downbeat as he told reporters that no deal was still the most likely outcome. But as we head into the final fortnight of the post-Brexit transition period every other sign points in the opposite direction.

The tone of Johnson’s joint statement with the European Commission president marked a dramatic shift as they acknowledged there were “major unresolved topics” but agreed that “it is responsible at this point to go the extra mile” to find an agreement. Gone was the invocation of “remaining significant differences” that made a deal impossible and the two leaders set no new deadline by which agreement must be reached.

“We are always happy to talk and to make progress where we can. I do think, as I say, there is a deal to be done if our partners want to do it. But we remain very far apart on these key issues,” Johnson said later. “The UK can’t be locked into the EU’s regulatory orbit and we’ve obviously got to take back control of our fisheries four-and-a-half years after people voted for it.”

The talks in Brussels have focused on the level playing field guarantees of fair competition and specifically on how to manage divergence between standards as Britain moves further away from the EU’s regulatory system. They have agreed that they will maintain current environmental and employment standards but the EU has demanded a mechanism to deal with any competitive gap that opens up if one side improves its standards and the other does not.

Both sides appear to have moved, with the EU accepting that any such mechanism must be reciprocal and Britain agreeing that there could be some “rebalancing” through the application of tariffs. Foreign secretary Dominic Raab suggested on Sunday morning that Britain was open to retaliatory tariffs on specific sectors affected by a divergence in standards but not to a “nuclear” option of blanket tariffs.

Although the dispute is sometimes framed in Britain as an issue of principle, the area of disagreement is now so small that it is really about how a reciprocal mechanism should work and how severe the available sanctions should be. Britain made a more important concession when it agreed not to lower its current standards in return for tariff-free, quota-free access to the European single market, closing down the option of making a bonfire of regulations to create Singapore-on-Thames.

Johnson’s choice is between accepting a tariff-free deal now with the possibility of tariffs being imposed in certain circumstances in the future, or facing tariffs on everything right away.

The other major unresolved issue is fisheries, where the two sides remain far apart on how much access EU boats should continue to have to British waters. The issue is economically insignificant but politically important both in Britain and in some European coastal states, notably France.

But if the two sides make a breakthrough on the level playing field, fisheries is essentially a numbers game that could be resolved in a complex calculation involving fish, money and time. British threats to use gunboats to see off French fishermen will help to reassure more excitable Brexiteers and enhance a likely post-deal domestic narrative of Johnson’s toughness forcing the EU to bend to his demands.

Much of the prime minister’s rhetoric in recent days should be viewed in the same light, so that when he is trumpeting the advantages of no deal, he is reassuring his backbenchers that if he does accept a deal it will not be out of fear. The choice of Raab, the only candidate in last year’s Conservative leadership contest to take a harder line on Brexit than Johnson, to do Sunday’s media round was also telling.

Johnson has nothing to fear from his invertebrate cabinet and little from a parliamentary party that is more exercised by coronavirus restrictions than the details of trade dispute mechanisms. Britain was bored with Brexit before Johnson promised in last December’s election campaign to get it done and much of the fight has gone out of the hard Brexiteers, including Nigel Farage.

“I just don’t know what the appetite is in the British public to keep this endless battle going on. For four-and-a-half years, a Conservative government has had the job of getting Brexit done and they’ve failed pretty miserably,” he said last week. “Is there a public appetite to keep these battles going on? I just don’t know. I’ll go on fighting for us to be free. How much of a force that can be I just don’t know.”

The prime minister said on Sunday that there was “a clarity and a simplicity” in a no-deal outcome “that has its own advantages”. But he has less to say on the economic advantages of no deal and most of his allies have long been silent on the economic case for Brexit itself.

Johnson has achieved from the negotiations with the EU most of what his narrowly drawn red lines allowed and he is unlikely to throw that away because some of the advantages of a trade deal could be withdrawn at some time in the future. A Brexit deal combined with a swift rollout of the coronavirus vaccine could boost Britain’s economic recovery from the pandemic and help to restore Johnson’s political fortunes.

The chaos of no deal would threaten both and no amount of sham gunboat diplomacy can obscure where the prime minister’s interests lie or the course he is now set on.