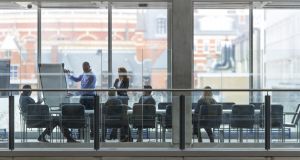 Flexible work practices are important to both men and women and important to the health and vibrancy of organisations and companies. Photograph: Istock

In an interview last summer, the BBC broadcaster Emily Maitlis quoted a colleague, Kavita Puri, who had offered her the following advice: “You have to ask for things at work – women sit there waiting for things to come to them, not realising that men are running off asking for them. Things don’t just happen, you don’t get something because you sit there politely and are well behaved – that’s not how it works.”

Robert Cialdini, professor of psychology and marketing, Arizona State University, said more or less the same: “A culture of self-advancement benefits men as they are expected to be aggressive, whereas women who are anything less than modest about their accomplishments are harmed interpersonally. It is essential for managers to advance the case for their people so that it becomes the cultural norm.”

On one level, Puri’s advice is probably very shrewd, and I wouldn’t dissuade any woman from embracing it. But on another level, it’s not the way things should be, and, in terms of genuine gender diversity, we need to move the dial – and the dial needs to be moved by men.

The argument for gender diversity is a compelling one, whether you are coming from the point of view of principle or pragmatism. But it won’t be achieved unless the cause is championed by strong-willed men in every organisation in this country.

From Ireland’s perspective, it’s not just about civil rights, it’s also about our economy. As we approach full employment, we need all hands on deck so that we maximise social progress through economic activity.

All the empirical evidence, and my own experience, indicate that teams perform best when they contain a high number of women. The dynamic is such that a whole group’s intellect becomes engaged in finding solutions and synergies that wouldn’t be found in a group that isn’t of mixed gender. Listening, distributive leadership, attention to creativity, encouragement of colleagues and avoidance of ill thought-out decisions, are all outcomes of such a dynamic environment.

In a speech to the 30% Club some time back, Catherine Day, the former secretary general of the European Commission, posed the question: “if Lehman Brothers had been Lehman Sisters would the world have ended up such a mess?” Maybe she was right!

Having observed Irish politics in the earlier part of my life, and Irish business in the later part of my life, both from the inside, I don’t think the country would have ended up in the mess that it did a decade ago if the banking and regulatory sector hadn’t been so male-dominated.

Aside from changing the culture of organisations so that gender diversity is a jointly-owned project by both men and women, the other important action for any organisation that is on this path, and particularly in the context of full employment, is to look at new ways of working for both men and women. It is no longer a case of full-time work or part-time work – added to the equation is flexible work.

Equally, only when men feel empowered to avail of flexible working arrangements will it become the norm and not seen as a female domain

Flexible work practices are important to both men and women and important to the health and vibrancy of organisations and companies. This is especially so since technology “creep” has turned into technology dominance in all of our lives.

If you want to be the best in class as an organisation or the number one in your sector, you need to run your business not on the hours people work, but on the responsibility they are given to get on with their jobs, manage their own time and deliver what their role requires. Interestingly, one rarely comes across recruitment advertisements highlighting flexibility; it tends to be offered on a reactive basis to individuals who have established themselves and whose work is highly valued by an organisation. This is a mistake because when it does happen, it’s often too late, which is a shame both for the individual and the organisation.

Equally, only when men feel empowered to avail of flexible working arrangements will it become the norm and not seen as a female domain.

We live in a world where it is incumbent on men and women to share the responsibility for delivering workplaces that are genuinely gender diverse and will, consequently, thrive.

Women not only have a right to sit at the table but are needed at the table. Gender diversity is not just about who is at the management table – it’s about ending economic inequality that comes hand in glove with gender inequality. A big vision is important but small actions have impact.

1 Coronavirus: Varadkar returns to practising medicine to help during crisis
2 Donald Trump’s clown car administration has put the fear in all of us
3 Restarting Ireland: When and how will we ‘get back to normal’?
4 Irish doctors on getting Covid-19: ‘In 90 minutes, I deteriorated quite rapidly’
5 Robbie Lawlor profile: A feared criminal with a long list of enemies
Real news has value SUBSCRIBE