Name and R-Number – Frank McNally on typos, tour guides, unusual baby names, and digging up the Hill of Tara 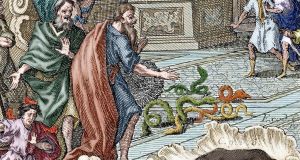 Aaron’s rod turns into a serpent. Moses’s brother was also something of a tour guide. Illustration: Getty

My apologies to Arran Henderson, the tour guide I mentioned here earlier in the week, whose first name I managed to get wrong despite double-checking it several times while writing. For reasons that remain mysterious, I read it not as in the Scottish island or Liffey quay, which would have been too obvious, but as a variant on the name of Moses’s brother. Hence my references to “Aaran”.

In part defence, I would plead that the biblical Aaron was also a tour guide. Along with Moses, he was a leader of the Israelites’ famous trip to the Promised Land. He even anticipated those latter-day Japanese guides who hold up flags and umbrellas as tokens of leadership, although “Aaron’s Rod” also had magical powers, including the ability to inflict plagues.

Arran H reassures me that I am far from the first to mislabel him. His unusual name was a compromise between parents who both favoured something more conventional but couldn’t agree, and he says the spelling issue has been “the bane of my life”.

Oh well. To avoid repeating the error, always a risk with such blind spots, I will henceforth think of him as Arran the two-r guide.

Misnaming people is a time-honoured tradition in newspapers. It’s even lampooned in Ulysses, where Joyce has a distracted reporter, Joe Hynes, recording the attendance at Paddy Dignam’s funeral. In keeping with another tradition, Leopold Bloom asks him to mention C.P.McCoy, who hadn’t taken the trouble to come but wanted his name included anyway.

Later that day, our hero is disgusted to read the Evening Telegraph report and discover that he has mutated to “L.Boom”. The absent McCoy, by contrast, is correctly spelt. And the mourners are also said to have included “M’Intosh” (short for Macintosh), a fictional persona arising from a half-heard comment about the appearance at the cemetery of an unidentified man in a raincoat.

Speaking of unconventional baby names, I was running in the park recently when I had to swerve to avoid a toddler, clearly over the limit for Calpol, driving his scooter erratically. “Watch where you’re going, Mason”, his Dad warned. And not for the first time, I was struck by how popular this once-unknown name has become here.

The Masons are everywhere these days – it’s like a conspiracy. I would have blamed the last construction boom, except that most of them were born since the 2010 crash. But maybe, like so many names, it represents parental aspiration – in this case the hope for a solution to the national housing shortage.

“The Masons” used to mean something else in Ireland and to be cited as a vague but sinister influence on public life. You don’t hear so much about them these days, although they’re still around. Indeed, their Grand Lodge in Dublin is only metres away from another shadowy institution often blamed for its baleful influence, Leinster House.

Both buildings featured in last weekend’s guided walk by Arran the two-r guide, but mainly for their architectural splendours. In the case of the Freemason’s Hall, as I had never stopped to notice before, these include a different style of Greek column for each of its three storeys, in the order prescribed since ancient times. Could anyone identify them, Arran asked?

From somewhere, I remembered that the top and most ornate style was Corinthian. I also guessed that the next one down was Ionic (although another of our number, Mary Dunphy, claims she said that first). It followed that the one at the bottom had to be Doric. I like to think of the Irishman’s Diary as a Corinthian column, by the way, although it has been called other things by people who have had their names misspelt in it.

Aaron-the-one-r-biblical character was important enough in his own right that his rod is said to be among the treasures contained in the Ark of the Covenant.

As such, it was one of the targets of a bizarre archaeological dig some 120 years ago, when the Hill of Tara was vandalised by a group who believed the Ark to be buried there.

The culprits were a group known as the “British-Israelites”, who considered themselves descendants of the lost tribes. Naturally, the masons were implicated too.

Those latter-day eccentrics who mark mid-summer at Tara every year now have nothing on the circus that ensued between 1899-1902, when the pro-and-anti diggers split along political lines.

Protesters included Douglas Hyde, who was warned off with a rifle. WB Yeats joined him. So did Maud Gonne, who lit a bonfire and sang A Nation Once Again. The Ark, by contrast, did not show up.