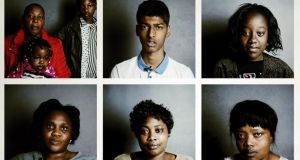 Living conditions and supports for the near 5,000 people in direct provision have not improved. Photograph: Bryan O’Brien

It is now 10 months since the Minister for Justice published a historic working group report. This was first fundamental review of the asylum process and direct provision system of accommodation since its inception. The report contained 173 recommendations, agreed by consensus and fully costed.

These recommendations aimed to resolve the situation of thousands of people residing in long-term “limbo” in the asylum system; to eliminate lengthy delays in the protection process; and to allow asylum seekers to live with greater dignity.

Outgoing Minister of State Aodhán Ó Ríordáin has said of the system: “None of us can stand over it. It’s just not acceptable.” Has it improved since the report’s publication last June?

Ireland and Lithuania are the only countries in the EU that do not allow asylum applicants access to the labour market at any stage during the process. The recent International Protection Act 2015 did not include a right to work for asylum seekers after nine months as recommended.

Key recommendations – on communal kitchens and additional living space impacting directly on the quality of life of children and families – remain unimplemented.

A proposal to increase the adult weekly direct provision allowance of €19.10 for the first time in 15 years, in line with welfare inflation in that period, was ignored. In January 2016 there was a token increase of €6 to the children’s weekly payment of €9.60, falling far short of the working group recommendation.

Since 2004. asylum seekers do not receive “universal” children’s benefit.

The biggest single issue voiced by asylum seekers in the consultation process was the length of time in the process. Then, more than 40 per cent of Direct Provision residents had been waiting at least five years since they first applied for asylum in Ireland.

The main recommendation is the principle that no person should be in the system for more than five years. It proposed that those in the asylum process for longer than this duration should be granted a protection status or leave to remain within six months.

Although there was no official announcement, there has been a de facto implementation of the principle. During 2015, 1,384 people more than five years in the system had their status resolved.

The progress in resolving the situation of those longest in the system is most welcome, but considerable work remains to ensure that all who could, will benefit. This can only be achieved in a timely fashion if the substantial additional case processing resources identified in the report are allocated in full.

An overarching goal of the recommendations was to ensure that Ireland puts in place a fair and transparent protection process providing final determinations within 12 months. Of great concern is that the long-awaited single application procedure may be unable to expedite case processing and eliminate delays as anticipated.

By the end of 2015, there were 2,582 pending cases before the Office of the Refugee Applications Commissioner and 1,685 live appeals before the Refugee Appeals Tribunal, despite a 50 per cent increase in completed decisions from these bodies.

A failure to provide required resources to eliminate the backlog of more than 4,000 existing cases and to process new asylum claims more speedily will undermine the new single application procedure before it commences.

A detailed costing exercise conducted by the working group demonstrated conclusively that investing in decision-making makes financial sense, yielding significant savings by reducing time spent in the system. The accommodation costs alone are €11,000 per person for each year in direct provision. The cost of decision-making is a fraction of this cost.

Overall, it projected the savings arising from improving the protection process and resolving legacy cases would exceed the cost of implementing recommendations on improved living conditions and supports. Net saving to the State over a five-year period: €59.1 million.

Ten months on, the implementation of key recommendations has been slow and inadequately resourced. In light of the indisputable evidence for reform, a continued failure to do so, and to provide the necessary resources, lengthy waiting times and unsuitable living conditions for asylum seekers will inevitably continue.

The human costs of this failure are considerable.

The time to act is now.