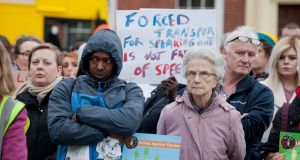 A demonstration at the Garden of Remembrance in Dublin calling for an end to the direct provision system: Most direct provision centres are in out-of-the-way places with no regular public transport. Photograph: Tom Honan

Last month, the Government opted in to the EU reception conditions directive, which among other things allows for a limited right to work for people seeking asylum. Prior to this, Ireland was one of only two EU states that imposed a total ban on access to work for asylum seekers. The opt-in was in response to a Supreme Court ruling in May of last year that found the total and indefinite ban on work that had been in place for two decades to be unconstitutional.

The announcement was initially welcomed. For once, there was hope in the direct provision centres across the country. Finally, people hoped to have the possibility of escaping enforced dependency, where they have to subsist and support their families somehow on €21.50 per week, often for years on end as they wait for decisions on their applications for asylum in Ireland.