April mayhem – An Irishman’s Diary about Walpurgisnacht, Bealtaine, and the Battle of the Somme 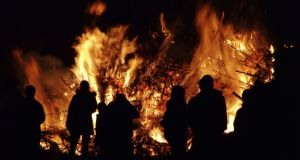 Walpurgis Night, which spans the last day of April and the start of May, is not much celebrated in these parts. But throughout Northern Europe it seems to occupy a similar role to Halloween, and is nearly as popular.

In Mikhail Bulgakov’s classic satire, The Master and Margarita, Walpurgis Night is when the devil (disguised as a cat) holds his grand ball, with chaotic consequences for an atheistic writers’ union in 1920s Moscow.

The date is also central to Goethe’s Faust. And somewhere at the other end of the literary spectrum, Walpurgisnacht is the setting for Ogden Nash’s Tale of the 13th Floor, set in a seedy New York hotel where the superstitiously numbered storeys go from 12 to 14, normally, except on the night of April 30th, when the elevator stops in between.

The date’s murky associations have little to do with the blameless Saint Walpurga, an 8th-century English nun who worked to convert the pagan Germans and whose feast-day happens to fall on May 1st. But it’s also odd that the Germanic night of mischief-making should be the chronological opposite of the Celtic one, which falls exactly six months later.

In Ireland, of course, May 1st is Bealtaine, a festival of great importance, historically, which also involved hilltops and Halloween-style bonfires, but was focused on celebrating the coming of the warm months. Cattle were brought to the summer pastures at this time and, to ensure their wellbeing, were first driven between two purifying fires.

One place where I know it to have been revived is at the famed Hill of Uisneach in Westmeath, the mythological centre of Ireland (as opposed to the geographical one, which is further west, in Roscommon).

Although only 182 metres high, Uisneach supposedly commands views of 20 counties. So a bit like the early RTÉ broadcasting from Athlone, the ancient Druids used to light fires on the hill at this time of year, from where the signal radiated to all other hills, including Tara, which then lit up too.

This year, I’m told, there will be a much smaller incendiary event at the site. Also, in keeping with the lunar calendar used by the ancients, the 2016 fires will not be lit until the new moon, May 6th.

I have somehow never yet managed to visit the Hill of Uisneach – maybe I’ll rectify this next weekend. But I did visit another hill of that name recently, in northern France, where – remarkably – they also had a Hill of Tara, just across the road.

These were not the official names, I should add. And the hills were barely hills – more like gentle ridges of a kind typical in the Somme valley, which surrounds them. From this last detail, you will guess that the names “Usna” (as they spelt it) and “Tara” were bestowed by Irish soldiers who fought there in the Great War.

The area is now and forever associated with the doomed heroics of the Tyneside Irish Brigade, who alongside the Tyneside Scots, were ordered to advance from reserve trenches on the first day of the Battle of the Somme – marching down one hill and up the other, through the “Avoca Valley”, before crossing no man’s land and attacking the enemy.

Alas, the execution of the plan was as confused as the geography. The fires that lit up the Hill of Usna that day were mainly from German machine guns, which all but wiped out both brigades. Some 70 per cent of the Irish were killed or wounded even before they had reached their own front lines, never mind no man’s land, or the enemy trenches.

1 Mother of McGinley children who were found dead is arrested
2 Miriam Lord: Sinn Féin goes arthouse for Everybody Can Have Everything manifesto
3 Election 2020 fact check: Do banks in Ireland pay no tax?
4 ‘In Ballyhaunis there were Arab people all around me’
5 Gordon D’Arcy: If Farrell can tap into our self-worth, we’re all on a winner
Real news has value SUBSCRIBE