Anti-Semitism endures as a staple of global racism 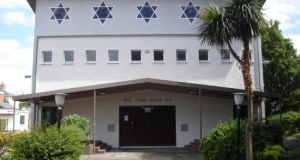 Synagogue in Terenure, Dublin 6: Any act of othering, whether out of unkindness or mistaken generosity, is a form of racism.

There is an elephant in the room. It’s been here a long time; nearly 6,000 years, give or take a century or two. Nobody is in full agreement as to what this elephant looks like. It moves freely among us, its bulk damaging us, desensitising us. But don’t worry: nobody need notice, or draw attention to it.

The elephant is grey; or white or black or brown, or maybe it is painted in leopard spots or rainbow stripes. Nobody is quite sure. Nobody is prepared to commit themselves as to its size or shape.

In fact, there’s only one aspect of this elephant upon which everybody is absolutely agreed: the elephant has a big nose. A very big nose indeed. Gross, fleshy, hooked, hideous; attached to an anthropoid face which triggers an atavist shudder of odium when seen. Ugly, repulsive, abhorrent, it is the homunculus of every trope of hatred, revulsion, fear and ignorance down the ages.

Prejudice – vile, loathsome and degrading prejudice; a prejudice which has efficiently succeeded in dehumanising, not just the victims, but the perpetrators also.

The elephant in the room is anti-Semitism: the acceptable, forgivable, familiar, unspectacular manifestation of global racism. It’s just there. Nobody seems to mind. It doesn’t mean anything; it’s merely a figure of speech or a literary device.

As an ideological platform, taking a stand against anti-Semitism doesn’t enjoy much cachet

Forget the Glorious Twelfth – it’s always open season for Jews. Anti-Semitism is a staple, solid, dependable kind of bigotry. Anti-Semitism has really managed to capture the public imagination during successive periods of human endeavour (think of the Holocaust, or the recent, embarrassing history of the British Labour Party, both illustrations of the vigour and enthusiasm with which anti-Semitism can be embraced if conditions are optimal, as they often are).

However, combating anti-Semitism hasn’t quite managed to spark the same degree of interest.

There are fashions in such things, a little like quinoa or sourdough. Unfortunately, challenging anti-Semitism isn’t trending. As an ideological platform, taking a stand against anti-Semitism doesn’t enjoy much cachet. It doesn’t sell advertising space, and it definitely doesn’t boost political careers.

We, the public, still remain to be dazzled by their expert manipulation of rhetoric and logic during deft, side-stepping discussions with mainstream media commentators. Instead, they wage war on intelligent, measured debate arising from the interdependent discourses of inclusivity and difference using the weighty, bludgeoning weapon of . . . stickers.

Yes, stickers. Little bits of gummed paper, beloved of children, generally embossed with shiny pictures of cartoon cars and fantastic fish. How risible, we might say. Laugh it off. It doesn’t matter. Except that these stickers – seen in towns and cities around Ireland and also shared online – feature explosively anti-Semitic images within their toxic remit.

Not original ones, of course; inventiveness and creativity aren’t encouraged within the far-right environment. No, these are the same medieval Jewish stereotypes as before.

Racism is complex and nuanced. It subverts our understanding of personal and collective identity

The past continues to extrude itself into the present, and currently, there is insufficient legislation in Ireland to deal with the rising tide of hate crime, whether directed at the Jewish community or at any diverse, discrete group within this jurisdiction.

Racism is complex and nuanced. It subverts our understanding of personal and collective identity. It can be barbed and deliberate, or it can be unconscious.

Any act of othering, whether out of unkindness or mistaken generosity, is a form of racism. As people, we all differ in character and personality, in our tastes and tendencies, in our capacity to act for good or bad.

None of this is dictated by the accident of our race. Except, it appears, in the case of Jews.The elephant is still lumbering around the room, demolishing the walls, smashing the furniture, crushing heads and bodies as it stampedes, unchecked.The problem is, no one has a burning desire to drive it away.

1 Let coronavirus spread through under-60 population, Dáil committee told
2 Miriam Lord: Let’s call a spad a spad – this Government has woeful timing
3 Air travel never going ‘back to way it was’
4 Ellen DeGeneres apology: Why do her words sound hollow?
5 Ireland’s top earners ‘do not see themselves as rich’, study finds
Real news has value SUBSCRIBE