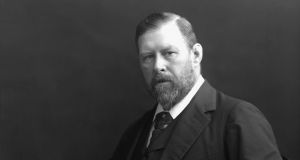 ‘Bram Stoker and the Haunting of Marsh’s Library” is the tantalising and well-timed title of an exhibition now running at that Dublin venue through Halloween and beyond.

On closer inspection, the “haunting” refers to a series of visits to the library by the corporeal Stoker, circa 1866/67, in circumstances less than supernatural. He was a humble civil servant at the time, newly ensconced at a desk in nearby Dublin Castle, although his trips to Marsh’s did at least involve passing through a cemetery.

The exhibition investigates his choice of books and pamphlets on those seven visits, details of which all still recorded, as possible influences on a literary career that climaxed with the novel Dracula.

And that too involves some poetic licence, because it was fully 30 years after his last visit that he produced his most famous work. In the meantime, he would launch his book-writing career with something more prosaic, a volume inspired by his experiences among the bureaucratic undead: The Duties of Clerks of Petty Sessions in Ireland (1879).

Still, as library director Jason McElligott points out in the exhibition booklet, it does seem significant that the events of Dracula culminate not at Halloween, where an Irish-born author might have been expected to place them, but on and around November 5th, the UK’s Guy Fawkes Night, traditionally celebrated as a triumph of Protestantism over Catholic conspiracy.

In this light, it’s telling that on his first trip to Marsh’s, Stoker requested a batch of old pamphlets including a religious polemic from 1686, describing the “Cruelties, Treacheries, and wicked Principles of that Popery which hath disturbed this Nation above an hundred and fifty Years”.

On his second visit, he requested “A True Account of the Siege of Londonderry”, while on his last, he ordered another 17th-century polemic, this time specifically on the evils of the Jesuits, likened in the text to “Mount Etna” because of their tendency towards “vomiting out flakes and flames of fire in all their practises”.

In fairness, there was plenty of poetry among Stoker’s requests too, as well as history, geography, science, and accounts of the great explorers.

Besides which, if the reading habits of the young author hint at hostility to Catholicism, the subtext of Dracula suggests his attitudes softened in the intervening years.

That book’s antichrist figure is after all defeated by a Dutch Catholic – Doctor Van Helsing – in coalition with English Protestants, some of whom also seem to have converted by the end. And of course, many key plot developments give a starring role to crucifixes and communion wafers and what might elsewhere be decried as popish practice.

Here, for example, is Jonathan Harker, expressing belated gratitude in Dracula’s castle to the Transylvanian peasant who, hearing where he was headed, hung a crucifix around his neck: “Bless that good, good woman […] It is odd that a thing which I have been taught to regard with disfavour and as idolatrous should in a time of loneliness and trouble be of help. Is it that there is something in the essence of the [crucifix] itself, or that it is a medium […]”.

Suspicions that the Stoker of later years was a closet Catholic may have been coloured by his wife’s public conversion in 1904.

But one critic – D Bruno Starrs, writing in the Journal of Dracula Studies (there really is such a thing) – has gone so far as to suggest that through the character of Van Helsing, he was consciously inverting one of the pivotal events of Anglo-Irish history.

“Instead of a Protestant Dutchman, William III […], sailing across the sea to save England from the perils of Catholicism and from its Irish exponents, Stoker gives us a Catholic Dutchman again crossing the seas to save England, this time armed with the holy sacraments […]”.

Mind you, the same commentator agrees that Stoker’s novel could also be seen as a “clumsy” attempt, in the bitter 1890s, to unite the “warring Irish Catholics and Anglo-Protestants” against a common, demonic enemy. That may be nearer the truth.

Only the fight against Dracula could force the unionists and nationalists of his time onto the same side. Maybe it will take something similarly supernatural to resolve the Brexit crisis between now and Halloween.

Speaking of which, incidentally, King William III continues to throw shadows on Anglo-Irish politics, in more ways than the obvious. Maybe Boris Johnson didn’t know this. But it was the then-Prince Billy, during a French-English invasion of 1672 when deliberate flooding was used as a defence tactic, who said that, rather than witness his country’s demise, he would “die in the last ditch”.