Angela Nagle: What the Alt-right is really all about

Their key concern is race, as they embrace slippery use of irony and sense of hip elitism 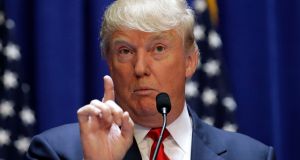 Richard Spencer, a movement leader named in the article, who popularised the term Alt-right, couldn’t be clearer or more explicit about his goal, which is to create a white racial consciousness in America. Some of the more ambitious aims discussed exhaustively in Alt-right circles include the creation of a white ethno-state in America and later a pan-national white European consciousness, uniting North America, Russia and Europe in a bloc or Empire.

Spencer is in the strict dictionary definition of the term, a racist. He claims “race is something between a breed and an actual species” and believes non-white Americans should leave in a “peaceful ethnic cleansing”. He believes the Alt-right will infiltrate mainstream American culture and politics, starting with deporting undocumented immigrants under Trump. Spencer’s Alt-right takes influence from the French New Right who were often called “Gramscians of the Right” applying the theories of Italian Marxist Antonio Gramsci, arguing that political goals would best be achieved through changing the culture and media from which formal politics would follow. And so far, it seems to be working.

The strictest definition of the Alt-right includes other overtly racial thinkers like Jared Taylor who calls himself a “race realist”, Steve Sailer who writes about “human biodiversity” – a pretty transparent euphemism – and Nick Land who explores the idea of the “Dark Enlightenment”. All of these are to varying degrees preoccupied with racial IQ, the Bell Curve, Western civilisational decline due to increased racial impurity, cultural decadence, cultural Marxism and Islamification.

In its broader milieu, there is the “alt-lite” made up of charismatic social media celebrities like Breitbart’s Milo Yiannopolous and VICE founder Gavin McInnes, mentioned in Pell’s piece. The alt-lite don’t share the hard alt right’s racial politics, despite the constant conflations of liberal media hyperbole – real Alt-righters regularly remind Milo he’s a “kike faggot” – but all these groups have emerged online around the same time, and interact and promote each other, sharing many of the same hatreds of political correctness, feminism, immigration, the welfare state and the cultural left. They also share the same aesthetic sensibility that emerged from the anarchy of 4chan, the anonymous site that popularised the Pepe the frog memes, which proliferated during the Trump campaign.

But let’s put some of this in perspective. While Alt-right leaders like Spencer are deadly serious and irony-free, it would be absurd to suggest that there has suddenly been a mass explosion of popular and sincerely-held white separatism in the US – a fevered liberal fantasy now mockingly associated with the expression “literally Hitler”. There are many in the Pepe-meme-sharing, Alt-right online world who probably aren’t that political but like the transgression and subcultural subversiveness.

No matter how familiar you are with the Alt-right, and I’ve watched them closely for many years, “explaining” the Alt-right’ to a general audience will always make you sound like an overwhelmed grandparent trying to figure out how to work the internet, in part because of their slippery use of irony. Stylistically the Alt-right is like the music subcultures of past decades, with its hip elitism that rolls its eyes at normies who don’t understand its conventions and argot – even though they are of course designed to be opaque to outsiders so as to resist easy interpretation.

The online culture wars of recent years have become ugly beyond anything I could have ever imagined. The seemingly sociopathic levels of amoral cruelty found in comment threads wherever Pepe memes lurk suggests an unpleasant answer to the question posed long ago by Plato’s Ring of Gyges – would we behave morally if we could be invisible and thus consequence free?

And this doesn’t apply exclusively to the Alt-right. A new generation of liberal left-identitarians display chilling levels of pack pleasure when conducting career-ending, life-destroying hate campaigns against people for minor infringements against the liberal moral code such as off-colour jokes. Some examples were chronicled in Jon Ronson’s So You’ve Been Publicly Shamed. I think what has led so many young white men in the US in particular to openly flirt with the Alt-right online is a sense that one may as well be hung for a sheep as a lamb. Why grovel when you can join an anonymous army of trolls to fight back with pure offensiveness. This is what the Alt-right offers.

But like the US socialist writer Shuja Haider recently argued: “It should go without saying that left-liberal identity politics and Alt-right white nationalism are not comparable. The problem is that they are compatible.” Tumblr needs 4chan just as neo-masculinist misogynists need a perpetual supply of listicles about man-splaining, and the Alt-right needs finger wagging “Dear white people” liberal commentary to denigrate ordinary white people at every opportunity. None of them would make sense without the other. While Spencer’s plans are unlikely to catch on any time soon, the emergence of the Alt-right should warn us of a now imminent nightmare vision of what the coming years might hold – a public arena emptied of any civility, universalist ideas or openly competing political visions beyond a zero-sum tribal antagonism of identity groups, in which the boundaries of acceptable thought will shrink further while the purged will amass in the fetid forums of the Alt-right.

Angela Nagle is a cultural critic for The Baffler, Current Affairs and Dublin Review of Books.

1 Coronavirus: Further 17 deaths reported along with 73 new cases
2 Binoculars at the ready: Elon Musk rocket to be seen in Irish skies tonight
3 Trump threatens to ‘close down’ social media companies after Twitter fact-check
4 Ancient Roman mosaic floor discovered under vines in Italy
5 Michael McDowell: We will laugh at the puritanism of the two metre advice
Real news has value SUBSCRIBE