An Irishman’s Diary on pilgrimages through Mussolini’s Italy 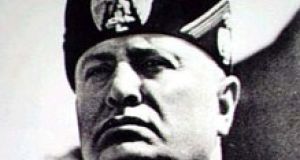 “Because Mussolini’s religious policy contrasted sharply with the anti-clericalism of contemporary regimes in France, Portugal, Mexico, and Russia, Irish visitors to Italy commonly perceived him as a man of providence.”

Until the twilight years of the last century, ultramontane theology featured heavily in Irish religious culture. A Latin phrase meaning “beyond the mountains”, ultramontanism originally spoke to the isolation of Rome from transalpine Europe.

Following the First Vatican Council (1869-70), which convened in an age of aggressive secularism, the concept came to mean fealty to the powers and prerogatives of the popes.

The Irish primate Cardinal Paul Cullen (1803-78) vigorously promoted a papal cult in Ireland. Consequently, by the time of Irish independence in 1922, a vibrant pilgrimage industry linked this country with Italy, and brought thousands of the pope’s Hibernian admirers to and from Rome annually.

From then until the mid-point of the second World War, Benito Mussolini, who was himself the centre of a personality cult replete with holy dimensions, ruled Italy. Overcoming his personal atheism, Mussolini promoted good relations with the Holy See, for he understood that the unification of Italy in the mid-19th century, which swept away the Papal States, had alienated Catholics from the pre-fascist regime.

Fawning fascist hospitality reinforced this false impression. On September 1st, 1923, for example, president of the executive council William T Cosgrave and Archbishop Edward Byrne of Dublin led 300 Irish pilgrims to Bobbio to commemorate the 13th centenary of St Columbanus. Throughout the celebrations, fascist dignitaries were everywhere in attendance. Blackshirts manned the cavalcade that transported the Irish dignitaries, while military bands performed Amhrán na bhFiann and the fascist hymn, Giovinezza.

Two years later, the “Great Irish National Pilgrimage” brought 800 visitors to Rome itself. As 1925 was a jubilee year and a holy year, this was a golden opportunity for Mussolini to project an image of consensus to outside observers.

Accordingly, the Irish enjoyed all the obsequious attention reserved for the pope’s foreign visitors.

Once again, the very important pilgrims included Cosgrave, who, in the company of no less than nine bishops, travelled south aboard a luxurious state carriage furnished by Mussolini.

Pomp and ceremony featured heavily at Rome Central Station, while the return trip featured a fascist choir that wooed the Irish at the Franco-Italian border with the Lourdes anthem, Ave Maria.

Further large-scale pilgrimages departed for Italy in September 1926, which marked the septcentenary of St Francis of Assisi. The climax of the Franciscan celebrations included a dubious speech by the cardinal secretary of state, Merry del Val, who claimed that Mussolini was “visibly protected by God”.

This blessing alluded to the actions of Violet Gibson, an Anglo-Irish spinster and Rome resident who reportedly suffered from “religious mania”. Unable to distinguish between Mussolini and the anti-Christ, Gibson procured a pistol and took three pot-shots at the dictator the previous April. Despite being slightly wounded by one of these efforts, Mussolini reacted instantly with an impromptu speech that urged his followers to “live dangerously”, thus coining a key slogan of fascism.

Meanwhile, Garda Commissioner Eoin O’Duffy led 250 Irish policemen to Rome in 1928. Once again, the fascists rendered full honours to their Irish guests, with the police pilgrims in turn parading solemnly at Italy’s Tomb of the Unknown Soldier.

For his part, O’Duffy wrangled what proved to be an abrasive encounter with the great man himself.

Apparently, the commissioner goose-stepped his way into the Duce’s presence, only to be rudely dismissed by Mussolini.

In his last significant role as Garda supremo, O’Duffy also acted as chief marshal when Dublin hosted the 1932 Eucharistic Congress. Only surpassed in scale by the visit of Pope John Paul II to Ireland in 1979, this event placed the theocratic dimensions of the Irish Free State on show to the world.

Given the secularist outlook of today’s Ireland, the visit next year of Pope Francis will be a more modest affair, though no less anticipated by the faithful because of this.

Ironically, the current pontiff happens to be Argentine because his Italian father fled to Buenos Aires to escape fascist persecution in 1929, the very year the Mussolini conceded the modern Vatican State.

1 Paraic O’Donnell: MS is meticulously destroying me. I am being unmade
2 Rape victim verbally abused in courtroom after two men are jailed
3 Dancing with the Stars has hit Father Ted levels of farce
4 Johnson adviser quits over comments on eugenics and race
5 Griveaux sex scandal threatens to reshape France’s relationship with Russia
Real news has value SUBSCRIBE