Locked out of history

An Irishman’s Diary about a forgotten son of Cork 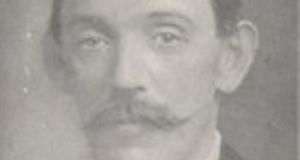 “Tadhg Barry was once a dominant figure in the life of Cork, moving in the same circles as Tomás Mac Curtain and Terence MacSwiney.”

It’s strange that the name of Tadhg Barry should be so completely forgotten in Ireland, even in his native Cork. After all, he was once a dominant figure in the life of that city, moving in the same circles as Tomás Mac Curtain and Terence MacSwiney.

Like those fellow revolutionaries too, he met a tragic and premature end, in his case at Ballykinlar internment camp. And one measure of the respect in which he was held is that among those who attended his funeral in November 1921 was Michael Collins, who broke from the treaty talks in London to return home for it.

According to this newspaper’s archive, Barry’s remains were first brought south to Dublin, where huge crowds lined the route from Whitehall to the pro-cathedral. It took the procession 90 minutes to pass a given point and most business in the city stopped for several hours.

There were similar reports from Cork, where the funeral was among the largest ever seen. But beyond that, The Irish Times archive has nothing more to say about Tadhg Barry. After 1921, the rest is silence.

Labour historians might blame the Civil War carve-up of Irish politics for Barry’s subsequent obscurity. He was very much on the James Connolly wing of the republican movement, his achievements including re-establishment of the Irish Transport and General Workers Union in Cork after it had been wiped out in a 1909 strike.

But even outside politics and trade unionism, there are reasons to remember him. He was also a journalist and writer. And not the least impressive thing he did was to publish a book called Hurling and How to Play It, one of the first books written about the sport.

How to play hurling is a subject that, in Cork, has always rivalled the national question for importance. So it may be apt that the book, subtitled A Guide to Those in Charge of Teams, and Players Desirous of Improving Their Knowledge and Ability in Ireland’s Historic and Unexcelled Game, was produced in 1916, when Barry was organising a local appearance by the aforementioned Connolly.

In fact, he was deeply involved in sport until, after the Rising, his trade union and republican activities increasingly dominated. He was in and out of prison from 1916 onwards and his final incarceration – in 1921 – was to prove fatal, earning him the dubious distinction of being one of the last victims of the War of Independence.

The exact circumstances of his death were never fully established. It’s known that, on November 15th, 1921, at Ballykinlar, he had been saying goodbye to a group of internees being released when, returning to his quarters, he was shot through the heart by a nervous young sentry. It may have been an accident. Unfortunately, there was the usual cover-up and the inquest was inconclusive.

Anyway, Barry will be belatedly remembered in his native city next week, with the screening of a film about his life. The documentary is a centrepiece of the second annual Spirit of Mother Jones Festival, itself a belated honour to another Cork native, born Mary Harris in 1837 but later to become famous as Mother Jones, a community and labour activist in the US and co-founder of the Industrial Workers of the World.

Given the year that’s in it, and the nature of Mother Jones’s work, this year’s festival will have the 1913 Lockout as a theme. But happily, for a Cork audience, that mostly Dublin-centred dispute has a strong Lee-side subplot.

Thus this year’s events will also include a talk on the lesser-known Cork lockout of 1909, which in some ways foreshadowed events in Dublin four years later.

The Cork dispute began as an inter-union feud, but soon escalated to the extent that 500 policemen had to be deployed on the streets to prevent violence. At its height, in June 1909, 6,000 men were variously on strike, locked out, or had been sacked. The unions lacked the funds to sustain such a situation, and by July the Cork ITGWU was in disarray, the situation from which Tadhg Barry would later rescue it.

As historian Luke Dineen says, this was “the first time the Irish urban poor came together for the purposes of mutual self-defence”. It didn’t end well. But it set the stage for the greater conflict in Dublin, teaching the protagonists contrasting lessons: the unions that deeper pockets would be needed to fund a long-drawn-out strike; the employers that, in Dineen’s words, “organised ruthlessness” was the path to victory.

The Spirit of Mother Jones Festival begins on Tuesday.