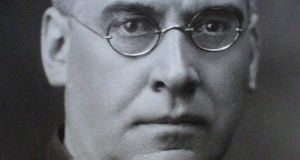 Msgr John Hagan: saw it as his duty to deflect British attempts to influence the Holy See against the Irish cause

Msgr John Hagan spent the large part of his adult life studying and teaching at the Irish College in Rome. Appointed college rector in 1919, he was also the senior Irish cleric in the Eternal City during the Anglo-Irish War. In this capacity, Hagan played an important role. He was at once the chief architect of a very astute Sinn Féin “Vatican strategy”, and a propagandist par excellence.

Radicalised by the 1916 Rising, Hagan was intensely nationalist in outlook, and saw it as his duty to deflect British attempts to influence the Holy See against the Irish cause. Accordingly, Hagan mentored the Sinn Féin diplomat and future president of Ireland, Seán T O’Kelly, in his dealings with the Roman Curia. Hagan also arranged a private meeting between Pope Benedict XV and O’Kelly. On this occasion, April 12th, 1920, the Irish diplomat fielded awkward questions about the ongoing IRA insurgency. In response, O’Kelly apparently lectured the pope on the complexities of Catholic political theory, while he also noted that one of Benedict’s predecessors, Leo XIII, had damaged church interests in Ireland by condemning the Land War of the late 19th century.

The highlight of the week was a reception at the Grand Hotel in Rome. Attended by some 600 Irish ecclesiastics, pilgrims and politicians, the night’s distractions included one inebriated bishop performing a rousing rendition of Wrap the Green Flag Around Me, while the organised entertainment brought proceedings to an eventual close with an enthusiastic performance of the Soldier’s Song.

Such images, however, should not detract from the serious import of the Plunkett beatification. A major propaganda coup that was hotly debated in the House of Commons, what became known as “Sinn Féin Week in Rome” received widespread coverage in the Italian, Irish and English papers. More importantly, Hagan’s activities drew the Irish bench of bishops closer to the national movement, thereby further reducing the likelihood of any papal condemnation of the IRA.

Apart from public displays designed to associate Irish clergy with Sinn Féin, Msgr Hagan was of central importance when it came to the dissemination of propaganda in the Italian press. Hagan published articles in a wide variety of Italian newspapers, including Il Popolo d’Italia, the fascist journal edited by the soon-to-be dictator Benito Mussolini.

In addition to his journalistic endeavours, Hagan forged strong links with the Partito Popolari Italia (PPI – Italian People’s Party). Headed by a fellow priest, Don Luigi Sturzo, the PPI was a powerful political force in pre-fascist Italy. Party emissaries undertook a fact-finding visit to Ireland in the summer of 1920, which resulted in parliamentary resolutions in favour or Irish independence, and “Pro-Irlanda” rallies in major Italian cities.

The Irish Civil War proved a severe blow to Hagan. Although anti-Treaty, he made sincere attempts to promote peace between the warring factions. Yet his support for the republican cause placed him in opposition to the Irish hierarchy, who famously denounced the irregulars in 1922. Through Seán T O’Kelly, Hagan also became an influential friend to de Valera, and was on hand to encourage and support the “Long Fellow” when he established Fianna Fáil in 1926. Indeed, Hagan’s intellectual influence is detectable in the theological aspects of the infamous “empty formula” argument employed by de Valera when he and his followers swallowed the oath and entered the Dáil in 1927. Hagan, however, did not survive to witness the Fianna Fáil victory of 1932. Plagued by ill-health throughout his rectorship, he died on March 8th, 1930.

Remarkably, he has yet to receive the biography his historical profile deserves.