The 1965 general election campaign was seen to lack bite: ‘Where are the torchlight processions, the excitement and the glamour?’ 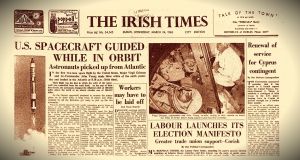 Ahead of the 1965 general election, an Irishman who has lived abroad is disappointed at how bland and civilised the Irish politicians are behaving during the campaign. What happened to the days of sharp exchanges, large crowds and torch-lit processions?

March 24th, 1965: A colleague who is having his first experience at close quarters of an Irish general election after many years working in England, has ex-pressed his surprise at the decorum with which the political opponents are conducting their campaigns. With first-hand experience of British general elections, he had expected a great deal more bite in the contest than he infact has found to be the case.

“There is nothing to compare here with the honest-to-goodness, hard-hitting battles between the Tories and the Socialists in a British general election. Politicians in Britain are much tougher with one another.” he complained somewhat plaintively yesterday. “Their invective can be searing.”

In fact he thinks that only one politician in this part of the world -and as it is a dubious honour, one supposes that it is best to let him remain anonymous-can compete with the Emrys Hughes’s, Macleods and Michael Foots of British electioneering. Such invective- as there as here, he feels, is too personal in its nature at the expense of the political.

He has found also that another of his impressions of an Irish general election has been shattered. He had expected more colour to surround the contest. Like many another Irishman abroad, his idea of Irish political campaigns was coloured by a history and memory of monster meetings, attended by thousands, of tremendous election tours in which elections were won and lost on the strength of a speaker’s oratory- “Where are the torchlight processions, the excitement and the glamour? Where, in fact, is all the glamour of ‘the Chief’s’ visits to the provincial towns?” he asked.

That, of course, is what he had remembered and half-expected to return to. Reluctantly, he is being compelled to realise that things have changed.

“Perhaps the lack, of excitement is due to the fact that the personalities, compared with the issues, are playing a much smaller part,” he said; and still pining for the absent glamour, added: “But it still seems to me that we are paying for our political maturity in terms of electoral dullness.”

A number of those present must have had personal recollections aroused yesterday afternoon when the Minister for Education, Dr Hillery, suggested that the Examination Hall of Trinity College, Dublin, was an appropriate place in which to hold an exhibition of “The Art of Writing.” With a smile, Dr Hillery pointed out: “This place has seen, over the years, many scripts from many hands.”

One hesitates to think in fact, how many students have under gone the anxieties of writing answers to examination papers in the hall in question; indeed, the physical effort involved in writing them can be quite something, speaking from personal memory.

The exhibition in question is a UNESCO travelling one, prepared by experts from several countries in 1964, and after its visit to Dublin it will be seen in Cork and Galway. It is housed almost next door to the Long Room of the Library of Trinity College, where another exhibition - this time of UNESCO publications - has been on display for some days and will continue to be so until June. The one opened yesterday will be on view until March 30th, so the next few days provide a good opportunity of killing two birds with one stone - in other words, of seeing two exhibitions in one visit to Trinity.

The exhibition opened yesterday presents, and one quotes “the story of writing, the birth and evolution of different systems and their subsequent impact on the life of man.” The paradox, of course, is that while almost half the world’s population still has to make do without writing, the more advanced societies are rapidly losing the art: “writing,” in this context, meaning the art of penmanship. It was a paradox which was touched upon yesterday by the Pro-Vice-Provost of Trinity Mr F La Touche Godfrey, who remarked that it was a pity to-da y that very few people bothered to write, preferring instead to employ secretaries and typewriters. “I am, perhaps, one of the very few surviving officers of the college who uses his own handwriting,” he said.

Dr Hillery, too, touched upon the question of his own handwriting, remarking inter alia that “among the highly sophisticated hieroglyphics of to-day is my own handwriting when it appears.” Amidst the laughter, he added: “I think the typewriter is a great blessing for many people.” It is a thought echoed from this quarter with no reservations whatsoever.

In fact, restricted to a typewriter alone, personal expenditure might be cut: it would be impossible to sign cheques.

Rather belatedly. I see that the Arusha Singers and Mr Dick Cameron are presenting a concert to-morrow night at eight o’clock in the Board Room of the Royal College of Surgeons, St Stephen’s green, Dublin, in aid of the work of Pere Pire, OP, the Nobel Peace Prize winner. The programme presented by the singers, under the direction of Mr Michael Turner and accompanied by Mr Frank Hughes, will include groups of Elizabethan, Jacobean and modern part songs as well as song and piano solos.

Mr Dick Cameron will play to his own singing of ballads from many generations. The concert promises to be an elegant affair for the 120 guests-each of whom is being asked to subscribe a guinea-are being asked to wear dinner jackets or short evening dresses. Admission will be by programme and these are available from Mr Guy Milner, Wesley College, Dublin 2.

A motorist friend, who has decided, in the interests of his health, to walk whenever possible in town, has discovered that old habits die hard. He was strolling down Grafton Street yesterday afternoon and turned left up Suffolk Street. He was half-way up Suffolk Street before he realised that without his car he did not have to obey one-way street directions.