Adam Boulton is right – We do need to get over ourselves

Tayto and Saoirse Ronan are not actual emblems on our flag 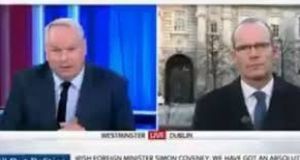 When Adam Boulton interviewed Tánaiste and Minister for Foreign Affairs Simon Coveney last week over the Brexit/Border issue his job was to challenge and confront Coveney over the Government’s approach and strategy.

In the event of there being any cultural representation of Ireland on international media outlets that does not meet with indigenous approval, the solution is simple. You ask what the reaction would be if the word “Irish” were to be replaced with the word “black”? You may then ascend to a place of ecstatic victimhood.

This pathological Irish predilection for believing we are in fact culturally black has just received another preposterous airing under the YouIrish social media hashtag inspired by a Sky News presenter.

When Adam Boulton interviewed Tánaiste and Minister for Foreign Affairs Simon Coveney last week over the Brexit/Border issue his job was to challenge and confront Coveney over the Government’s approach and strategy.

The interview though was viewed on this side of the Irish Sea as being “arrogant” and “condescending”. Some on social media labelled Boulton “xenophobic” and “racist”.

It was in response to the these criticisms that the presenter tweeted (late on Saturday night – there’s a clue) “Some of you Irish need to get over yourselves. Interviewing is about challenging the interviewee not respecting”.

Whatever about the fabled power of those Russian Twitter bots being able to undermine Western democracies and subvert the electoral process, they have nothing on the mass mobilisation skills of Irish social media users whenever there is a perceived slight from Perfidious Albion.

The Little Irelanders came out to play, valiantly reclaiming “You Irish” from Boulton and transforming it into an Ireland Uber Alles hashtag.

This Mobius strip of social media inflected reaction may be all fun and games (particularly when an English person is in the dock accused of the capital offence of disrespecting the Irish) but it is injurious to journalism.

Whether it be a grievous terrorist attack or the Great British Bake Off, the phrase “Twitter reacts to . . .” before these events is now a commonplace mainstream media sight.

The latest Pew Research Center media study has found that two-thirds of adults are now reporting that they get some of their news from social media outlets. This unregulated sector where – Lewis Carroll like – facts mean merely what you choose them to mean and a heightened emotional response is valued over and above the actual truth – is precisely why the medium is favoured by Donald Trump.

The only large-scale empirical comparison done to date has found that those who get their news/views from social media get trapped in a “collective social bubble” as they are using a significantly narrow range of sources on the medium. Thus, information is being transformed from an individual to a social endeavour.

You can currently view how this works at the demented nationalistic #YouIrish hashtag which was established to remind an English Sky News presenter that we only accept obsequious blandishments and “gas craic” style tributes from Johnny Foreigner.

And just when did we get so sour and dour about ourselves? Boulton is right – we do need to get over ourselves. Comparing the treatment of the Irish in Britain with that of African-Americans in the US is a display of historical ignorance; we shouldn’t need to be revived with smelling salts if someone mentions potato or Guinness in the same sentence as Ireland. Tayto and Saoirse Ronan are not actual emblems on our flag.

The Little Ireland #YouIrish hashtag is a mirror image of those Little Englander Brexiteers in all their boorish, victimised, nationalistic neuroticism.

And for the last time: we didn’t invent the submarine and The Beatles aren’t Irish.