An evangelical response to the same sex referendum 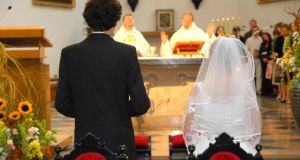 On May 22nd people will be asked to add to the Constitution’s article on the family: “Marriage may be contracted in accordance with law by two persons without distinction as to their sex”.

On the surface this may appear an attractive proposal. We all believe that every human is made in the image of God and is equal in value and dignity, regardless of gender, age, race or sexual orientation. Without reservation, we want to make clear that the persecution or oppression of any person because of their sexual orientation is absolutely wrong.

The Constitution regards the family as (article 41.1.2) “the necessary basis of social order and as indispensable to the welfare of the nation and the State”. Article 41.3.1 states: “The State pledges to guard with special care the institution of marriage, on which the family is founded, and to protect it against attack.”

An attack on marriage

We respect the right of same-sex couples to have their relationships protected in law but we reject the idea that this union shall be regarded as the same as marriage.

The Judeo-Christian faith always taught that marriage was initiated by God at creation (Genesis 1:27, 28). Jesus clearly affirmed that marriage is between a man and a woman: “From the beginning the Creator made them male and female. For this reason a man shall leave his father and mother and be joined to his wife, and the two shall become one flesh” (Matthew 19:4-6).

Christian churches have historically supported this Biblical basis of marriage.

In May 2012 the Church of Ireland general synod affirmed that: “marriage is . . . a union permanent . . . for better or worse, till death do them part, of one man with one woman, to the exclusion of all others on either side”.

In June 2014 the Presbyterian Church affirmed that “marriage is to be exclusively between one man and one woman”.

In February this year the Methodist Church reiterated: “It is the will of God that, in marriage, husband and wife should experience a life-long unity [where] children may be nurtured, family life strengthened, and human society enriched.”

Pope Francis also recently addressed this issue, saying: “The family is threatened by growing efforts on the part of some to redefine the very institution of marriage.” Powerful forces “ threaten to disfigure God’s plan for creation”, he added.

Without protection and support for the unique place of marriage in society, the State could, in effect, deprive children of the right to be raised by their mother and father.

This referendum proposal effectively says the State should not and will not promote the most ideal family environment for raising children. It implies the natural ties between a child and its mother and father have no basic value. Minister for Health Leo Varadkar, speaking on the Civil Partnership Bill in January 2010, affirmed: “Every child has the right to a mother and father and, as much as is possible, the State should vindicate that right.”

Freedom of conscience regarding religious beliefs is a basic human right. This would be challenged by a Yes vote.

Already there is extraordinary social pressure on people to endorse same-sex marriage. Service providers such as caterers and photographers would be acting illegally if, on grounds of conscience, they were to decline services for same-sex weddings. In the UK three adoption agencies had to shut because they were not prepared to provide adoption services to same-sex couples.

Opinion polls show if the referendum was held now a majority would vote Yes. But we believe popular opinion will change. There have been 37 referendums abroad on this subject and in 34 a majority voted to reaffirm the traditional view on marriage. Referendums were held in the past three years in Slovakia, Croatia and Slovenia, all affirming traditional marriage and rejecting same-sex marriage.

We will be voting No in this referendum and encouraging others to do likewise. Pray that Irish citizens will give attention to the above key issues when they vote.

Paddy Monaghan is writing on behalf of a cross-denominational group of 50 evangelical church leaders from Catholic, Protestant and Pentecostal churches urging a No vote in the same-sex marriage referendum. Further information: email anevangelicalresponse@gmail.com