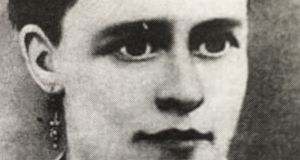 Ellen “Nellie” Cashman: it was said that her name was known in every mining town from Mexico to Alaska

There can’t have been many gold miners in the American wild west who, at their funerals, were also spoken of as candidates for “canonisation”. But there was at least one. And the achievements of the person in question are even more remarkable in light of two other notable facts – that she was (a) a woman and (b) from Cork.

By some accounts, Ellen “Nellie” Cashman was born near Cobh, in 1844. By others, it was Midleton, in the fateful year of ’45. This latter version is supported by a baptismal record in that town. But in any case, having survived the catastrophe that befell Ireland in the intervening years, the infant emigrated with her mother to America in 1850, never to return.

They spent years in Boston where, working as a bell-hop (a usually male preserve opened to women by the civil war), Nellie met a future US president, Gen Ulysses S Grant. He was sufficiently impressed to declare: “The West needs people like you”. Soon afterwards, she was proving him right.

When the family moved to San Francisco, Nellie contented herself a while with being a chef. Then the mining bug bit and by the time she opened her own hotel and restaurant in Nevada, she was already planning to bypass the middle-man and go straight for the precious metals at source.

But her defining moment, probably, was a move to British Columbia in 1874 during what became known as the Cassiar Gold Rush. She didn’t find much gold there (except through another successful hotel), but may have found herself instead.

Central to the discovery was her meeting with a community of nuns, the Sisters of St Ann, who were trying to build a hospital in the state capital, Victoria, a cause to which she was ever afterwards devoted.

While in Victoria, however, she also learned of the plight of 200 fellow miners, former colleagues now stranded by snowstorms up north. Risking her own life, she led a 77-day rescue mission, with medical supplies. When the men were safe, typically, she then invited them to express gratitude in the form of donations for the hospital, collecting $547.

It was during the same trek that she earned a distinction for which another occasional gold-miner, Mark Twain, is famous. In her case, it was only a qualified obituary, the Daily Colonist newspaper reporting in February 1875: “It is feared that she has perished from the intense cold.”

That too proved to have been greatly exaggerated. But the story made clear that this “indomitable female” was already a local legend, even if, speaking of legends, the newspaper had her being from “Limerick” and aged “22”.

She survived the obituary to spend another 50 years following the mining camps, to Tombstone Arizona (where she knew Wyatt Earp and built a church), Baja California, and the Klondike. Along the way, she inherited a family – the children of her dead sister Frances. Yet she remained a prospector everywhere, while also mining the miners – the successful ones – on behalf of the less lucky.

It’s said that when she entered saloons, all the men would stand out of respect.  This helps explain how she got away with one of her signature fundraising moves, which involved surveying poker tables for piles of cash and, sweeping these off, assuring card players that they surely wouldn’t object “if this money goes to the good Christian women that’s taking care of the sick”.

She fell sick herself eventually, and fatally, during yet another expedition, this time in Alaska, in 1924. Aged 79 and sensing the end, she asked to be brought back to the nuns in Victoria. After her death there, in January 1925, it was reported that “bearded men wept unashamedly”.

Recalling her reputation, decades later, the Daily Colonist explained: “The name of Nellie Cashman was synonymous with warmth and generosity in every mining town from Mexico to Alaska”. Yet only since 2015 has she had a monument in Midleton and she remains remarkably little known in her native land.

In fact, even in Canada, she takes second billing these days as “Victoria’s Other Nellie”.

This is because Nellie Furtado comes from the same town.

But happily, one Dr Patrick P Lydon is on a mission to revive her fame. To this end, he sent me a copy of his recent booklet, The Amazing Story of Nellie Cashman, which can be read at nelliecashman.wordpress.com.

And I’m told that her admirers in Victoria are also now planning a new, improved memorial to this “great Irish heroine”, in time for her centenary.