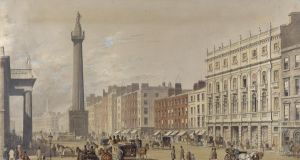 If you were christened “Michael Angelo”, as was Michael Angelo Hayes, who was born 200 years ago on July 25th, the chances are probably reasonable to good that you would become an artist. But, in his case, that his father was an artist and his teacher provide far more convincing reasons.

The father, Edward Hayes (1797-1864), who was from Tipperary, was a successful portrait painter in watercolour and miniature.

In The Watercolours of Ireland (1994), Anne Crookshank and the Knight of Glin described him as “one of the best practitioners of the decorative small picture”. He did some very good group portraits in the romantic style and also some fine landscapes.

Michael Angelo Hayes was born in Waterford but by 1831 the family had settled in Dublin, where his father set up in business and became a member of the Royal Hibernian Academy (RHA). Hayes junior was instructed by his father in art and also attended the RHA Schools.

By an early age, he had gained a substantial reputation for his pictures and drawings of horses and military subjects.

In 1836, he produced what was to prove one of his most popular pieces of work. It was a series of four illustrations entitled “Car Driving in the South of Ireland” and featured the famous Bianconi coaches, one of the main forms of public transport in Ireland at the time. They were engraved by John Harris and published by Ackermann in 1836. Concerning them, Crookshank and Glin remarked: “They were extremely popular, were often reprinted and clearly made his name.”

He first exhibited at the RHA when he was only 17 and again featured at its exhibitions in 1840, 1841 and 1842. Regarding his appearance at the 1841 exhibition, an art critic wrote: “This young artist is fast making a name for himself. His contributions show originality as well as a quick perception and close keeping to natural effects.”

In 1842, he became “Military Painter-in-Ordinary” to the lord lieutenant and spent the next decade mostly in London, where he exhibited at the New Society of Painters in Watercolours, of which he became an associate in 1848.

He also exhibited at the Royal Academy, for the only time, that year. His London works were on military subjects and some of them were on a grand scale, such as his well-known 16th Lancers Breaking the Square at Aliwal (1846). It was exhibited at the London New Watercolour Society in 1852, the catalogue for which gave a detailed account of the battle and the people shown in the painting.

Two other London pieces are Third Light Dragoons at the Battle of Moodkee (1847) and Heavy Cavalry Charge at Balaclava (1855). In these works, “the horses are so superbly orchestrated”, according to Crookshank and Glin.

Hayes devoted a lot of time to studying the illustration of the horse in motion and in 1876 he delivered the fruits of his studies in a paper entitled “The Delineation of Animals in Rapid Motion”. Walter Strickland in A Dictionary of Irish Artists (1913) pointed out that in this paper, Hayes anticipated many of the conclusions arrived at in modern times, especially in rejecting the notion of the “flying gallop”.

He had settled back in Dublin by 1853, became a full member of the RHA the following year and its secretary in 1856. His tenure provoked a bitter controversy within the organisation. The academy’s finances were in a mess and its rules were widely flouted. Hayes set about putting the finances on a sound footing but his reforms antagonised older members. This led to a schism where at one point the academy had two sets of presidents, two secretaries and two councils. It took some years to settle the divide but by 1861, Hayes was again secretary, a post he held until 1870.

Hayes painted few landscapes but his A View Down Sackville Street, Dublin, 1858, which is in the National Gallery of Ireland, is a fine piece of work. It gives a wonderfully wide perspective on the street, which is bustling with activity (people, carts, carriages), with Nelson’s Pillar dominating the centre – a glimpse into how the centre of the city looked in the late 1850s.

He became secretary to the lord mayor of Dublin, Peter Paul McSwiney of Sackville Street, whose sister he had married, and was appointed city marshal in 1867. While examining a water tank on the roof of his house, he fell in and was drowned on December 31st, 1877, and is buried in Glasnevin.