‘A bit of a character’ – An Irishman’s Diary on Enid Starkie , Irish-born Oxford academic and literary critic 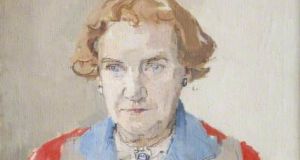 Portrait of Enid Starkie by Patrick George. Time magazine referred to her as “a brilliant Rimbaud scholar who pub-crawls about Oxford in bright red slacks and beret while smoking cigars”. Courtesy of Somerville College, Oxford

‘A bit of a character” is how an Irish newspaper journalist once referred to Enid Starkie. The colourful Dublin-born academic worked in Oxford University for over 30 years. She is best remembered for her authoritative studies on major French literary figures. During her time at Oxford, she occasionally ruffled the feathers of her fellow dons, especially when it came to appointing academic chairs. She was born in 1897 into a learned family. Her father, the Greek scholar and translator, WJM Starkie, was president of what is today NUI Galway when she was born.

Starkie received a rounded education which began with a series of French governesses at the family home in Killiney, Co Dublin. This was followed by attending Alexandra School and later Alexandra College in Milltown. From there it was on to Somerville College, one of the 45 colleges that make up Oxford University. She then attended the Sorbonne University in Paris from where she obtained her PhD.

Starkie carved out a place for herself in academe with studies of French canonical writers such as the poets, Arthur Rimbaud (1947) and Charles Baudelaire (1957). She penned a study of the highly influential novelist, Gustave de Flaubert (1967) and wrote on the Nobel Prize-winning writer, André Gide (1953), as well as some less well-known writers.

These include Petrus Borel, a writer of the Romantic movement who was said to have been a forerunner to the Surrealists.

Critics have been generous in their praise of Starkie’s work. Her book on the enfant terrible of French poetry, Arthur Rimbaud, was lauded by a critic in the New York Times who said that it was “the fullest and fairest of the half-dozen books in English on Rimbaud. No single volume so complete exists even in French”.

Starkie was also praised for her ability to write in such a way that made her work accessible to all readers without dumbing down, with one critic saying that “she wrote with limpid ease and forthrightness about the lives of her subjects while weighing their achievements with a very great assurance”.

Starkie had a curious relationship with the land of her birth. She spent most of her adult life living and working in Oxford and held a British passport all her life.

She summed up her feelings towards her homeland and her place of work saying, “I am Irish by birth and French at heart and I earn my living in England”. She was proud of her Irishness and regularly returned to Dublin, giving talks in Trinity College. She was also involved with the Irish Circle Literary Society and spoke at the Irish Club in London.

We can get a sense of her personality from her memoir about her life in Dublin and Oxford, A Lady’s Child. The book caused a sensation when it was published in 1941, dividing critics. While some took umbrage at her willingness to say exactly what she felt about her early life, others admired it, with one reviewer saying that it was “pulsating with life in every line”.

Starkie’s physical appearance matched her eccentric personality. Her petite frame was usually topped off with a beret, as noted by Time magazine that referred to her as “a brilliant Rimbaud scholar who pub-crawls about Oxford in bright red slacks and beret while smoking cigars”.

Starkie became involved in university politics when she championed poets for prestigious academic positions. Dating from 1704, the Chair of Poetry is thought to be Oxford’s oldest, but Starkie said that she was tired of seeing critics being appointed to the role. Instead, she wanted to see poets being rewarded for their work.

She is believed to have aided WH Auden, Robert Graves and Cecil Day-Lewis to be appointed to the distinguished position of professor of poetry.

Sadly, some of her fellow dons resented her involvement in the process, with one lamenting that “this was a serious academic affair until Dr Starkie turned it into something like the Oxford and Cambridge boat race”.

In July 1968, she wrote to Samuel Beckett offering him the chair. In a short but respectful reply, Beckett declined. He said that he was greatly touched and grateful that she thought him worth it. However, he said “such honours are not for me”. Beckett had studied Italian at Trinity in the 1920s with Starkie’s elder brother, Walter (1894-1976).

Starkie’s own contribution to the academy was recognised when she was elected member of the Irish Academy of Letters in 1950.

France made her a chevalier of the Légion d’honneur in 1958 and Trinity awarded her an honorary doctorate two years later. She was made a CBE in 1967.

Her reputation also crossed the Atlantic and she was appointed as visiting professor of French literature at the universities of Berkeley, Seattle, Colombia and Virginia.