US president Joe Biden has signed a number of executive actions on his first day in office, including one that sees the United States rejoin the Paris Climate Agreement, a reversal of his predecessor Donald Trump's policy. Video: The White House 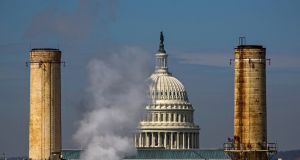 The dome of the US Capitol is seen behind the smokestacks of the Capitol Power Plant, the only coal-burning power plant in Washington, DC. Photograph: EPA

World leaders have welcomed new US president Joe Biden’s swift move to rejoin the Paris climate accord as one of his first acts in office.

But UN secretary general Antonio Guterres warned that there was still a very long way to go in tackling the worsening climate crisis.

Mr Biden signed a series of executive orders within hours of becoming president, among the first of which ordered a return to the global Paris Agreement on tackling climate change.

He also took a range of actions on the environment domestically such as ordering the reduction of methane emissions from the oil and gas sector, banning drilling in the Arctic Refuge and cancelling permits for the Keystone XL oil pipeline from Canada.

The US formally left the Paris accord on the day after the presidential election in November, the only nation ever to do so, in a move instigated by former president Donald Trump, who pursued environmentally damaging policies while in office.

The deal commits countries to curb global warming to 2 degrees above pre-industrial levels and aims for a more stringent 1.5 degree limit to avoid the worst climate impacts — which require pollution to be cut to net zero within a few decades.

The world remains well off-track to meet the accord’s goals, and countries are expected to bring forward new, more ambitious climate plans ahead of the UN Cop26 summit being hosted by the UK in Glasgow in November.

Mr Biden has pledged to ensure the US reduces its emissions to net zero by 2050, and other countries will be watching what actions and plans he sets out in the run up to the climate talks.

In a tweet, the Britsh prime minister added: “In the year we host Cop26 in Glasgow, I look forward to working with our US partners to do all we can to safeguard our planet.”

EU commission president Ursula von der Leyen said she was “delighted” that on day one of the new administration, the US was rejoining the accord.

“This is the starting point of our renewed cooperation. And way more is to come,” she tweeted.

French president Emmanuel Macron also welcomed the US back to the accord, negotiated and agreed by countries meeting in Paris in December 2015.

Mr Guterres said he warmly welcomed Mr Biden’s steps to re-enter the accord, which will take effect on February 19.

He said that following an online Climate Ambition Summit co-hosted by the UN, UK and France in December, countries producing half of global carbon pollution had committed to carbon neutrality — cutting their emissions to zero overall.

The commitment by Mr Biden brings that figure to two-thirds, he said.

“But there is a very long way to go. The climate crisis continues to worsen and time is running out to limit temperature rise to 1.5 degrees and build more climate-resilient societies that help to protect the most vulnerable.”

He said he looked forward to the leadership of the US in accelerating global efforts towards net zero, including the bringing forward of a new climate plan — required under the Paris Agreement — with ambitious targets for 2030 and finance to help poorer countries ahead of Cop26.

“I am committed to working closely with President Biden and other leaders to overcome the climate emergency, and recover better from Covid-19,” he said. – PA