Woman who sought asylum in Ireland to advise Somali PM 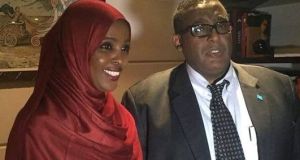 A woman who arrived in Ireland in 2006 as a 17-year-old asylum seeker has been appointed as an adviser to Somalia’s prime minister.

Ms Ahmed, who underwent female genital mutilation (FGM), will return to Somalia in May to help to draw up a national FGM eradication programme.

Ms Ahmed this month got Mr Sharmake to sign a petition with more than one million names calling on Somalia to make FGM illegal. She is currently studying at Kimmage Development Studies Centre in Dublin.

Ms Ahmed, who has set up a charity named the Ifrah Foundation, has promised to enact FGM legislation at the next Somalian parliamentary session in May.

Some 98 per cent Somalia’s female population between the ages of 15 and 49 have undergone FGM, according to recent figures from Unicef, making it the country with the highest prevalence of the practice in the world.

FGM has been unconstitutional in Somalia since 2012, but no bill has been passed to ban FGM outright.

And while her family are extremely proud of Ms Ahmed, they are also concerned, she told The Irish Times.

“It is basically for me leaving Ireland and going to Somalia, which is a warzone, so loads of my friends and family didn’t want me to go back. But I thought that we have acted to stop FGM in Ireland so why not Somalia?”

Ms Ahmed was in Somalia from 2014 until late 2015 and helped to draft the national policy against FGM. She also produced case studies on sexual violence that are now being used by the UN.

She said much of Somali culture and tradition “is beautiful” but she plans to continue her work to end the practise of FGM.

Welcoming Ahmed’s appointment, Ifrah Foundation board member Mary McGuckian said: “Given that Somalia is at crisis level in so many areas after decades of war, it has been an amazing achievement by Ifrah getting this issue to the top of the agenda.”

Ms Ahmed said: “What I see in Somalia is different from what I see in Ireland. In Ireland every woman has a voice. In Somalia, if you have money, you have some influence, but if you are poor, women are treated like pieces of meat.”

She said that as a refugee she had appreciated her life in Ireland, but said “women in Somalia need our support. It hurts my heart to see how women and children are treated.”

Ms Ahmed will stay in Ireland to attend the launch of the Second National Action Plan on FGM in Ireland on May 4th. She will then return to Somalia where the national parliament will reconvene later that month.