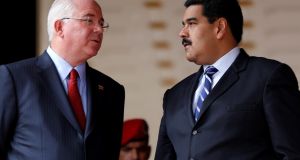 Venezuela has ordered the removal of Rafael Ramirez, once a powerful oil minister and head of state oil company PDVSA, from his post as representative to the United Nations in New York, four sources with knowledge of the matter said on Wednesday.

Though the decision will not affect the Opec nation’s struggling oil industry, it may help president Nicolás Maduro shore up his position in crisis-stricken Venezuela as the country heads toward presidential elections in 2018.

Mr Ramirez, an increasingly vocal critic of Mr Maduro in recent months, was seen by some as angling to be a presidential candidate as Mr Maduro’s unpopular government and an economic crisis have fuelled divisions with the ruling Socialist Party.

“He was fired last night,” said a source with knowledge of the information, who asked not to be identified. Mr Maduro sent Mr Ramirez to the UN in 2014 in a major demotion from his decade-long roles as oil minister and head of PDVSA. He also served briefly as foreign minister.

Venezuela’s information ministry did not immediately respond to a request for comment. The United Nations has not received formal notification of Mr Ramirez’s removal, a UN spokesman said.

Vice president Tareck El Aissami said on Wednesday that he hoped Mr Maduro would be re-elected in 2018, the clearest indication yet that the former bus driver will seek another term despite the economic crisis.

However, he was not present when his turn to speak at a meeting on the rights of the Palestinian people came up, according to diplomatic sources at the meeting.

Two sources said foreign minister Jorge Arreaza travelled to New York this week. Another source said Mr Ramirez tried to fight back and negotiate but was unable to.

Mr Ramirez has published several online opinion pieces this year criticising the management of PDVSA for allowing oil production to plummet and admonishing the government for not taking measures to improve Venezuela’s tanking economy.

In one piece this month entitled the “The Storm”, he described his efforts in 2014 to help stabilise the economy, which Mr Maduro’s allies perceived as an attack on the president, according to one source.

The article played up his close relationship with late president Hugo Chávez, who tasked Mr Ramirez with leading oil sector nationalisations that began in 2007.

Chávez’s deity-like status in the Socialist Party makes any relationship with him a commodity that officials often use when vying for influence or jockeying for position.

Mr Maduro, who calls himself “the son of Chávez”, this week named a military officer to head PDVSA and promised to break up “mafias” that have stolen from the nation’s coffers. Some of his comments in a speech on Tuesday appeared aimed at Mr Ramirez’ tenure.

“We’ve witnessed the rise of mafias that controlled important areas of our oil industry,” Mr Maduro said in the speech during the swearing in of major general Manuel Quevedo.

“They didn’t just steal from the country ... they believed themselves to be the owners of the oil industry.”

Venezuelan authorities last week arrested the acting president of its US-based refiner Citgo and five of the subsidiary’s top executives as part of the corruption probe.

Since August the authorities have ordered the arrest of around 50 oil industry managers as part of the anti-corruption sweep. - Reuters