With a tweet, Trump blows up Republican strategy for ex-ambassador

US president Donald Trump slammed the impeachment hearings at a press conference in the White House calling them "a disgrace". Video: The White House 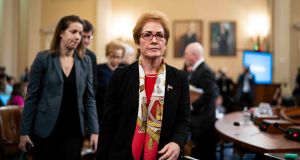 Marie Yovanovitch, the former United States ambassador to Ukraine, during a break in her testimony before the House Intelligence Committee in Washington,. Photograph: Doug Mills/The New York Times

Heading into Friday’s impeachment hearing, the Republican strategy for dealing with Marie Yovanovitch was simple: treat the ousted ambassador to Ukraine with respect during her testimony Friday and avoid any appearance of bullying a veteran diplomat who had been vilified and driven from her post.

US president Donald Trump blew up the plan. Yovanovitch had just begun to recount, in powerful and personal terms, the devastation and fear she felt when she learned Trump had attacked her during a July 25th phone call with the president of Ukraine. She was “shocked, appalled, devastated that the president of the United States would talk about any ambassador like that,” she said.

It was just the kind of human moment that Republican members of the House Intelligence Committee had anticipated, a political trap they were determined not to fall into. But they apparently didn’t anticipate how Trump would react.“Everywhere Marie Yovanovitch went turned bad,” Trump wrote on Twitter, sneering at her to his 66 million followers while recounting an earlier posting in her diplomatic career. “She started off in Somalia, how did that go?”

By repeating the same kind of verbal attack that made Yovanovitch a sympathetic witness for the Democrats in the first place, Trump undercut his own party’s best chance at minimizing the impact of her testimony. And he handed Democrats another new argument - that his tweet amounted to nothing less than witness intimidation that itself could become an article of impeachment.

“That was not part of the plan, obviously,” said Jeff Flake, the former Republican senator from Arizona, who clashed repeatedly with Trump before he announced in 2017 that he would not seek reelection in 2018. “He can’t help himself. You would think every instinct would be to lay off. She’s a sympathetic witness. But he seems just to be incapable of controlling himself.”

The president’s tweet was at once surprising and entirely predictable. Trump has used Twitter to attack his adversaries nearly 6,000 times since becoming president. He has repeatedly tweeted that the impeachment inquiry is a “hoax” and has lashed out at diplomats and national security officials calling them “never Trumpers” who are out to undermine his agenda. For weeks, he and his allies have obsessed about the identity of the whistleblower whose complaint about Trump’s phone call with president Volodymyr Zelenskiy of Ukraine jump-started the impeachment inquiry.

Everywhere Marie Yovanovitch went turned bad. She started off in Somalia, how did that go? Then fast forward to Ukraine, where the new Ukrainian President spoke unfavorably about her in my second phone call with him. It is a U.S. President’s absolute right to appoint ambassadors.

But his decision to fling the sharp-edged insult an hour into Yovanovitch’s testimony was the latest evidence , as if any more was needed , that Trump’s instincts are rarely in sync with the interests of his party. White House aides insisted Friday that the president was too busy to watch the hearing, but in fact, he chose to watch Yovanovitch, who had stuck in his craw because he saw her as an obstacle to his desire to have investigations into Hunter Biden, the younger son of former vice president Joe Biden, people close to Trump said.

On the first day of the impeachment hearings on Wednesday, the president had managed to avoid commenting about the two men who testified - William Taylor, the top diplomat in Ukraine, and George Kent, a senior State Department official. But his inability to hold his fire Friday raised fresh doubts among his allies and White House advisers about what he will do next week, when eight witnesses are scheduled to testify in public hearings over the course of three days.

Trump did not clear his Friday tweet with top White House aides before putting it out, leaving some of his advisers deeply dispirited. Privately, they acknowledged he had done himself damage. Not long after Trump’s tweet, his son Donald Trump jnr fired off his own broadside, tweeting, “America hired @realDonaldTrump to fire people like the first three witnesses we’ve seen. Career government bureaucrats and nothing more.”

The president’s congressional allies had largely held back from those kinds of direct attacks on Taylor and Kent. They had planned to be especially careful with Yovanovitch.

Trump didn’t get the message and Democrats seized on the political opportunity he handed them. Not long after the president tweeted his thoughts on Yovanovitch, Schiff read it aloud, to Yovanovitch and the cameras. “Now the president, in real time, is attacking you,” Schiff told her. “What effect do you think that has on other witnesses willingness to come forward and expose wrongdoing?” Her answer was succinct: “It’s very intimidating.”

Following the hearing, some Republican lawmakers defended the president’s decision to tweet at Yovanovitch even as others grudgingly acknowledged that it wasn’t the kind of message they had hoped to highlight. “We’re not here to talk about tweets,” Representative Elise Stefanik, told reporters. “This is not the first or last tweet they are going to complain about.” But under repeated questioning, she added: “I said I disagree with the tone of the tweet.” Stefanik and other Republican members struggled to focus on the message they had hoped to deliver throughout the day: that Democrats had put in place an unfair impeachment process that denied Trump’s defenders their rights. Representative Lee Zeldin, said Trump was just “fighting back.”

But that was not how the week was supposed to go, especially at the White House, where Trump had scheduled a series of events to highlight what he said he was doing while the Democrats were focused on impeachment. The idea was to embrace the strategy that former president Bill Clinton used during his own impeachment fight. Clinton described that strategy on CNN on Thursday. “I would say, ‘I’ve got lawyers and staff people handling this impeachment inquiry and they should just have at it,’” Clinton said. “’Meanwhile, I’m going to work for the American people.’ That’s what I would do.”

Early Friday morning, Stephanie Grisham, the White House press secretary, issued a statement saying that Trump would watch the opening statement by the top Republican on the committee. She added, “but the rest of the day, he will be working hard for the American people.”

To illustrate that, the White House had scheduled an announcement for Friday afternoon on new rules to promote “honesty and transparency” in health care prices. But as soon as the event was over, reporters deluged the president with questions, about his Yovanovitch tweet.–NY Times