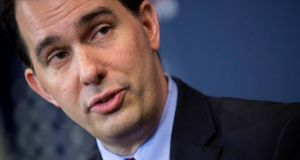 Scott Walker, governor of Wisconsin: he surged ahead last weekend in an opinion poll in Iowa, a year before parties there nominate their candidates. Photograph: Andrew Harrer/Bloomberg

When Republican governor Scott Walker proposed cutting another $300 million (€214 million) off the University of Wisconsin’s budget and told its teachers they should work harder, he drew an angry response.

John Sharpless, a history professor at the university, chided the Wisconsin governor, telling a local radio station he should refund part of his salary for the time he spends outside the state on his nationwide tour building his profile for a run at the presidency in 2016.

“I wanted to bring home that if he is going to be critical of those of us who work in the university system, he should look to his own house,” Sharpless told The Irish Times. The professor, himself a Republican who ran for Congress in 2000, is unhappy the governor is seeking a second round of budget cuts at the university on top of reductions in pay.

Walker’s cuts are the latest fight picked by a combative governor who has a reputation for fulfilling tough election promises, cutting education and health spending and challenging the status quo.

“One of the things that Scott Walker has done from the beginning is he tells you what he is going to do and he does it,” said Sharpless. “Many people warm to that candour and, shall I say, aggressive rhetoric. They find it quite attractive in a candidate.”

Conservatives love it. So much so the governor of Wisconsin, a midwestern state with an economy not much bigger than Ireland’s, has emerged as a dark-horse challenger to leading establishment candidates in the “invisible” Republican primary fight for the 2016 nomination. It’s 21 months to the ballot but the race is under way.

The 47-year-old surged ahead last weekend in an opinion poll in Iowa, a year before parties in the state will be the first in the country to nominate their candidates. The poll, carried out by Bloomberg Politics and the Des Moines Register, put Walker in a slight lead, at 15 per cent, in the largest likely field of Republican candidates and the most open race in the modern history of the party.

He came out ahead of leading candidates Kentucky senator Rand Paul (14 per cent) and former Florida governor Jeb Bush (8 per cent), brother of ex-president George W Walker polled just 4 per cent in the poll in October.

He enthralled a gathering of more than 1,200 social conservatives at the Iowa Freedom Summit last month. He spoke emotionally about the threats to his family when he challenged Wisconsin’s labour movement with laws limiting collective bargaining rights of most public sector unions and pushed through tax cuts and anti-abortion policies.

Walker became the only US governor in history to survive a recall election in 2012 after more than 900,000 people in Wisconsin signed a petition demanding a new election. In his Iowa speech, he noted he had won three elections in four years (his last in November) in a state that has voted for a Democrat in the last seven elections.

“That sends a powerful message to Republicans in Washington and around the country – if you’re not afraid to go big and go bold, you can actually get results,” he told the conservative faithful in Iowa.

On his presidential aspirations, Walker has gone big and bold without hesitation. He has established an exploratory committee called “Our American Revival” and hired former Republican National Committee political director Rick Wiley to organise a campaign.

He has made prominent appearances at party events, stopping off at a private gathering of donors in California last month hosted by conservative billionaires David and Charles Koch. While he is popular among conservatives who dominate the Republican caucuses where the party’s nominee is picked, support for Walker from the party’s hard-right Tea Party faction could be diluted by another contender, Texas senator Ted Cruz. Also, the religious right may prefer former Arkansas governor Mike Huckabee, a Southern Baptist minister expected to run again after a failed bid in 2008.

Not having a college degree and sometimes coming across as dull in speeches may also handicap the Wisconsin governor. Still, his election victories and low-tax, small-government policies have excited the Republican grassroots, marking him out as one to watch.